I had a last USA comfort meal of a Big Mac with Cheese and fries in Laredo, TX [No photo required] then crossed in Nuevo Laredo, MX. There are two bridges to cross into Mexico. Of course my helmet cam is not working right (user error) and I picked the wrong bridge. After clearing the initial formalities I wanted to complete the temporary import of the motorcycle. That when I was informed that I should have taken “Bridge #2” not “Bridge #1.” Not a big deal. The directions were simple, loop under the bridge and ride a few blocks.

I had been through this crossing in 2008 and was familiar with the building and the steps. This time the customs office was very quiet, short lines, got through fairly quickly. I used my Irish passport for the first time, to enter Mexico, so my records will consistently use the same passport for later border crossing. Eric, at Olympia Moto Sports, had made multiple copies of key documents. Having copies in hand speeds up the paperwork required to import a vehicle at international. Sometimes you still have to have copies made after a stamp is applied to the copy from your kit or a new document needs to be copied…but it good to have a set ready. It doesn’t help to have a copy of your wife’s BMW car registration when you thought the motorcycle registration was being duplicated in North Carolina. Oh well, a quick stop at the copy window and I was outta there.

Mexico now requires a $400.00 deposit when preparing a temporary import of a motorcycle. They take credit cards and refund the money when you exit the country. This is Mexico’s way of collecting some money from people that bring vehicles into the country and sell them there illegally.
I headed south as quickly as Nostrumo would take us, away from the troubles that haunt Mexican border towns. Stopping for a break as I head to Monterrey, MX. The last time I ran out of gas with the lights of Monterrey in sight. I was determined not to repeat that near catastrophe by fueling up before leaving Laredo.

The plan was to spend the night in Monterrey, but the plan lacked details, like where to stop. I ended up in the south end of Monterrey, but still very much in the city. The GPS is useless and my sense of direction is failing me. A kind moto delivery guy pointed me in the right direction and I decided to get out of town instead of stay the night. I spent the night in the next town west a “auto hotel.” The sign noted a Jacuzzi, which sounded good for my back. 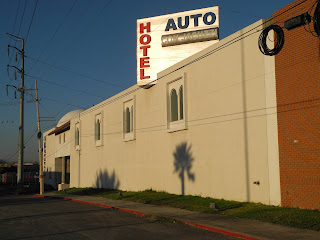 I forgot what auto hotels were about. They are used for people to have discrete affairs and are well suited for motorcycle travel. Generally the rates are established for hourly periods. You pull your car into an individual garage, so no one from the street can see that you car and you are checked in. The security of a personal garage lends itself to a good night sleep. They are always very clean and the rates are generally pretty good. While not as cheap as a hostel, the rates are still low. The $300 peso rate,   about $23.34 USD, depending on the actual exchange rate. I wanted 8 hours, not the advertised 6, so the charge increased by 1/3. I used my iPhone offline translator to communicate with the clerk. Well worth the $5.99 the app cost! 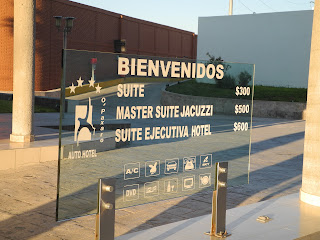 The rates vary. Here are the rates for another auto hotel in the middle of nowhere that I saw a few days later. $100 MX Pesos is about $8.00 USD. 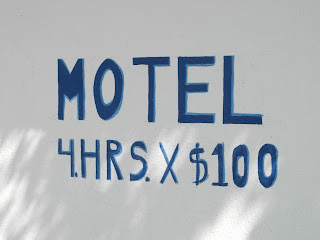 Here is a photo of the interesting furniture provided for the enjoyment of the clientele. Hmmmm... 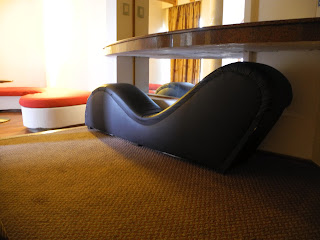 The next morning a truck pulled into a gas station with one of it’s back tires total gone. 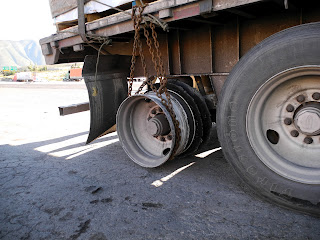 Further down the road I stopped for a break and saw across the highway a guy selling juice. I HAD to get a picture of this! 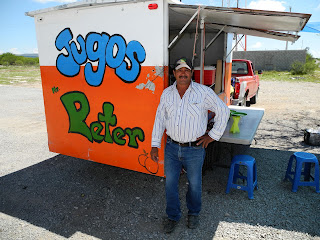 I spent the night in Ciudad del Maiz at a lovely hotel. Pictures to follow. While looking for a hotel I passed a one tent Mexican circus and thought that would be a cool thing to see…then completely forgot about it.
Great chicken on my way to Las Pozas. 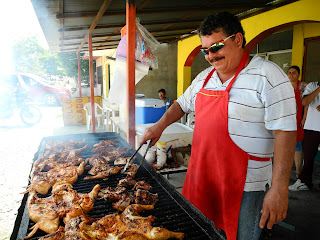 Next stop, the surrealist sculpture gardens of Edward James at La Pozas