Its morning and I riding in eastern Columbia after a few hours sleep at the military check point. The goal is to get to the Venezuelan frontier early, before the tourist buses and truck start lining up. It a real drag to arrive at immigration right behind a bus or two full of tourists.  It can make the difference between flying through the process in minutes and spending a hour or more inching forward in a line. The steps on any given frontier can be easily understood or clear ass mud. The process is basically the same, but sometimes there are extra steps.

Leaving a country – this part is a piece of cake

Confusing, huh? Welcome to my world of travel. The part that kills me is seeing HUGE stacks of importation paperwork in the customs offices. As an information technology professional, when I see these piles of paper, I cringe. There workflow and data management would be so much more efficient if everything was digital.  I supply the same information again and again. If the workflow would support a digital file (i.e. in XML format), then a thumb drive could be presented, the common information imported and processing completed efficiently and with higher accuracy.

Hopefully you have spent all of your coins from the last country. If not, you can usually get rid of them at the border. Buy candy, food, water, whatever. No one wants your coins from the last country once you get far from the border. Try as you might, the little bastard turn up in back pockets and various nooks and crannies. There is no stopping them, they accumulate, little stacks here and there. Ask me how I know.

In Central America you will be approached again and again for “assistance.” If you aren’t comfortable filling out the forms and navigating the convoluted steps, then hire a helper. Set the price in advance. I used to ask and the answer was always the same, “give me a tip.” When you are done the fuzzy amount and suddenly become a demand of much more than what is reasonable. Pay no more than $5.00 USD and again, set the price before you enlist a helper. If they say the amount is too low, then turn to the next helper who is waiting for your business. Last and most important, if you hire a helper, never release your documents to them. And insist that you physically pay all fee yourself. They will tell you it will go much faster if you give them your papers and a chunk of money. Don’t do it. You won’t get the right change for the money you have given over to them. Your documents are critical to moving forward and you NEVER should hand them over to a helper at the border. If you do, then they will have enormous leverage over you and can demand a high assistance fee before you get the papers back.

If you hire a helper, then pay a kid to keep an eye on you motorcycle. Or tell your hired helper to have a friend watch your bike. Loose change is all that is expected to pay someone to watch your bike. You’ll be approached by cambo guys (money changers.) Have a currency calculator with you, loaded with the current bank rate. I use the free iPhone app “Currency.” I have gotten much better deals then the amount first offered when I show them the bank rate. Sometimes I walk away from a cambo deal. Rarely do you need to money to pay a fee at a border, and there is usually an ATM or established cambo office just down the road where you can withdraw more money at a better rate. The exceptions are Venezuela and Argentina. The economy is in a bad state and you’ll do better changing money privately or on the street, than at a bank. in Venezuela and Argentina, I transferred money offshore to friend’s bank account from my account, got a *much* higher rate in the private deal, then a bank would. In Argentina my friend took me to a financial house in downtown Buenos Aires where I exchanged USD for pesos at a better rate than the bank would offer. Go figure.

As I was entering Venezuela I was approached by a cambo guy and offered a rate that was way higher than the bank rate. Confused, I decided that I wasn’t using the currency calculator correctly and refused the deal. Later I exchanged a little bit of money as someone took me I needed to pay a fee for my Venezuelan visa (the information is incorrect.)

Entering Venezuela from Columbia is a little confusing, at least for me with my weak Spanish language skills. After checking out of Columbia and did not recognize the sign for Venezuelan immigration and rode on. I was stopped at a police check point and more confusion ensued, I rode on into the vast no mans land between countries, looking for immigrations and customs. It is a mile or so before the customs office appeared. Where is your visa? Dunno. Go back up the road and get one. Ok, see you soon.

Finding immigration and a line of tourist I got my visa. Walking away from counter I stopped to organize myself and heard someone say “Hello.” Dozens of border crossings has thicken my skin. I’ll ignore the constant barrage of greetings and solicitations. Again I heard someone say “Hello.” Now I noticed there was no Spanish accent and looked up to see a young guy with a motorcycle helmet in hand. He definitely was not Spanish and obviously a traveler. Demetri is Greek/English and riding east into Venezuela. I wanted for him to get his visa, then we went to customs to import the motorcycles. The process went quick. One of the fastest I have ever experienced.

Demetri had just retrieved his motorcycle from storage between countries. Surprisingly to learn, there are business that exist in the no man’s land between countries. In this case Demetri could store his bike for 7-8 months without a time limitation that would be set by importation papers. He had been traveling in South America and needed to return to England. Now he was back and ready to see more of South America. First, his motorcycle needed maintenance, so we headed for the first big city, Maracaibo.

The route near a border can be total crap. The roads east of the Venezuelan border are reaching for the poor maintenance prize. Deep pot holes that could swallow a small car. In addition, the cars are in really bad shape. Many looked like they were in a demolition derby and lost, yet still roll forward. I saw one car that had a frame so screwed up that the front and rear axle where some what parallel, but the front and rear wheels were following the line…

Gas in Venezuela is really, really cheap. To reduce the trade of cheap Venezuelan gas over border to Columbia, cars have a transponder attached and fuel cannot be pumped at a gas station without it. The transponders are only used in gas stations roughly 100 miles into the country. I needed gas and had limited local currency. What to do? Around the corner we found a line of people selling gas from containers. It was gun to the head prices, but we could continue. 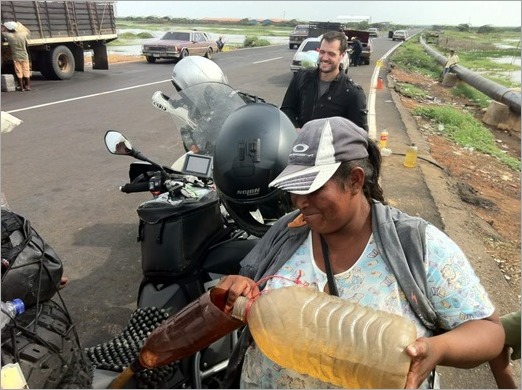 Now on to Maracaibo where Demetri needed to find a Yamaha mechanic.