It's Friday, the day before we are scheduled to leave Cienfegous, Cuba. The morning was dedicated to surrendering our Cuban motorcycle license and provisional license plate. 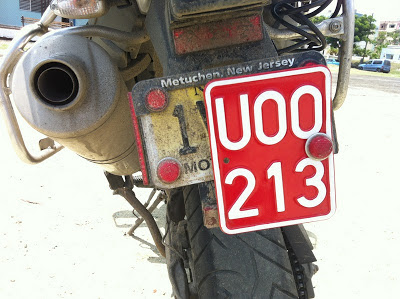 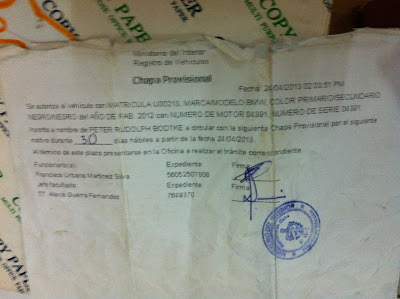 One side of my temporary Cuban drivers license

The six Stahlratte passengers with motorcycles arrived at Transito to complete the process, only to find that the whole facility was closed for a funeral. We are told the office will reopen Monday morning.

The guard at Transito said he would make some phone calls when he went off duty at 9:30 AM. Werner and I returned to the marina to inform Captain Ludwig of the situation and hope he could get aduana (custom) official to work on a solution from their end.

A three day delay will wreck my plans for meeting my wife in Mexico City. As it is I have to ride more than 1000 miles in two days to meet Ingrid when she arrived in Mexico. If we do not leave Cuba until Monday, then Ingrid will visit Mexico City without me.

Needing to change the motorcycle oil, I rode 10 minutes back to my casa, near the marina. As I was starting the oil change word came to me that Transito had opened for us. Too late to stop, so I continued and joined the group 20 minutes later. The timing was perfect for me, as they had just finished all of the other bikes and processed mine. Everyone's bike was ready, except Werner's. It failed to start this morning and he went to Transito with his license plate and papers, hoping they would process his motorcycle without seeing it. No chance. Werner didn't want to tow the bike and he didn't have enough money (or time!) to have a truck transport the bike. Of course, Transito refused to go to the marina and inspect his bike. He was sick the day before and not feeling well, so he sat and sat in the Tranito office waiting for them to provide a solution. Word got to him from the Captain that the boat would leave the next day, with him or without him. Werner finally agreed to let his wife Claudia tow his motorcycle. Fortunately Transito remained open until he arrived...
Posted by Peter Bodtke at 1:44 PM