Itacaré and the Monster Hill

Andy is an old friend from New York. His company makes custom wooden interiors, kitchen cabinets and more. His clientele include the rich and famous, a few movies stars and a platinum record recording star or two. He bough a piece of land in the hills above Itacaré, then designed and had a house built to his specification.

Before leaving on the trip, Andy and I talked about riding various parts of South America together; Venezuela deep into the Amazon and meeting at the Dakar Rally were two ideas. It wasn’t possible for him to schedule a motorcycle adventure with me during my trip. He would be going to Brazil a few months after I was gone, so I would stay in this tropical paradise alone…well I did have the company of Andy’s cat. 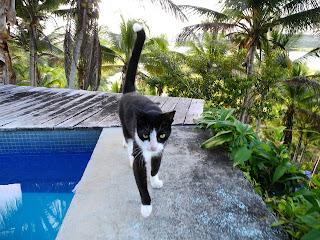 Andy instructed me to contact Dorothe, the lady who manages Andy’s property for him. Her friend Barbara was back for another visit. I arrived at 10:30 PM, later than expected, after traveling a winding and bumpy road for four hours from Salvador. The ladies met me and encouraged me pick up incidental provisions before going to the house. I was confused. Couldn’t I just go back out later and pick up a few things? I have gotten to the point in my life and I push back a little, then listen to the local advice and go with it. There some some communications gaps with these two lovely German speaking ladies.

I picked up beers, milk and the like and we headed off to Andy’s place.
Dorothe mentioned that the road was rough going up the hill to the house. How bad could it be? She was driving a simple car that didn’t have a lot of clearance. I brushed the warning off as a piece of over concern. We coursed through the beach town street, turn down more and more obscure roads, then up a narrow single track behind a house that looked like the lane would end at any moment. If I was following an absolute stranger, I would be nervous that this was a back woods road, just right to rob a hapless traveler. Dorothe hit the gas and I lost sight of her around as she went around an uphill turn. I should have gunned it as well. And I definitely shouldn’t have stopped midway up the steep hill. Ok, in my defense the ruts in the road were daunting and I didn’t feel like I was in control, so I slowed down…and that turned into stopping.

Coming to a stop was not a good idea. I soon discovered the front wheel had zero traction due to the angle and the weight of the luggage on the  rear of the motorcycle. The back wheel simply slid on the packed dirt and gravel. I went backward for 10 - 15 feet before losing control, and the bike toppled over. No damage, other than a slight bruise to my ego.
Shortly Dorothe came back down the hill with her car to find me off loading the panniers and spare tires that are lashed to the back seat. At one point the spare front tire went rolling down the hill and I had to chase  after it into the jungle. Soon enough I had the bike upright and gunned it up the hill.
Dorothe and Barbara presented a nearly endless chorus of apologies and condolences,  that my assurances could not reduce. The dropped bike story only adds to my adventure. I will try the hill in the morning, without the weight of the panniers and using more gas! Apparently many visitors drop their bike the first time going up this beast of a hill.

I met Ademi, the house keeper, then settled in. Dorothe provisioned the house with bananas, drinking and coconut water, sheets, t.p., towels and fresh cut flowers. I won’t have to leave the house for days if I choose. I had beer, a can of black beans, some chorizo sausage, powered milk, bran cereal and a few pink mangos from Veronica’s yard in Salvador. 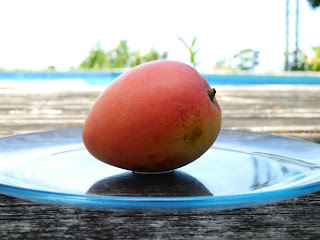 Before turning in for the night I took a moonlit swim in the pool, the first of many. Later I would write Andy that I planned to never leaving his house. On second thought, I had better depart in a day or two or I will turn into a smiling bowl of tranquil goo… Yeah, it was that good.
Posted by Peter Bodtke at 5:20 PM