The final route from New Jersey to Costa Rica

Posted by Peter Bodtke at 3:15 PM No comments:

On my way home I stopped in Hendersonville, NC, and hung out with Kevin & Karilea. I made a simple repairs to the soft luggage, replacing nylon cords that had been pressed into service when a tie down strap broke, due to chaffing and vibrations. I bought another dog leash and cut off the collar clip, thus fabricating a replacement tie down. I had to do this in Costa Rica as several straps went missing. We had several home cooked meals and watched the first DVD disc of "Long Way Down." I envy McGregor and Boorman for the trips they are able to take and am even more jealous of their support crew. On the other hand, I enjoyed the simplicity of my trip logistics. Hey, who wants all those support crew hanging around when hitting the open road? 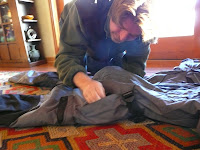 I ordered a EXO heated jacket liner and had it shipped to Houston, so I was ready for chilly, but not frigid weather. Kevin & Karilea are old friends and the owners of Olympia Moto Sports. They hooked me up with a Phantom one piece riding suit, so I could navigate cold weather in comfort. The one piece suit made the trip home a pleasure. [Kevin making final adjustments to the suit.]

Crossing North Carolina, east to west, I stopped at had a long conversation with Brian Lord in Durham, NC, about the comings and goings of the VistA healthcare information software community.There is never enough time to catch-up with Brian, but we covered as much as we could and said goodbye. 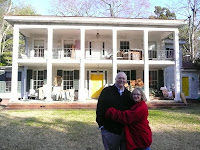 renovating a house and will open the restored house as a B&B. We enjoyed the remaining George T. Stagg (bourbon) that I had been carrying since Ingrid brought the fine elixir to me in Panama.

Monday morning I saw a weather window and a chance of rain the following day, so said goodbye to Wayne & Suzanne and hit the road. It was about 70 degrees when I left Enfield and the forecast reviled that the temperature will drop with each hour as I rode north. As Washington DC faded in my rear view mirror and Baltimore approached, the sun started to set. I could almost watch the thermometer needle drop as the last rays of light were lost behind the horizon. It is startling how much the cooler it gets immediately after sunset. Motorcyclists understand that the chill factor is significant on riding down the highway. In simple words, it feels a lot colder riding a motorcycle at speed, then it does standing still outside. Wind chill is a #%@!

As darkness set in my feet and finger tips begin feeling the nip of old man winter. I straighten my fingers across the levers, seeking shelter of small plastic rain guards. Getting my fingers out of the wind helps considerably. At a rest stop on the NJ Turnpike and add another pair to socks to ward of the cold. A small gap in the stitching of my right boot had developed a few weeks ago, which I cover with cloth tape to keep stop a draft on my right foot. When I arrived home to temperature had dropped to 37 degrees.

Traveling up the east coast and closer to home, the excitement increased with each milestone. Counting the exits on the New Jersey Turnpike, watching the decreasing number of miles to go on the GPS, and finally turning down my street. Home at last. Three months, three weeks, three oils changes, a new back tire (due to wear), miscellaneous part replacements (nothing major) -- AMIGA has served me well. The trip was amazing, the experiences, new friends and visits with old friends, advancement of VistA awareness in Central America...priceless. As Kevin would say, "The trip of a life time", I can only agree. Soon I will get the itch to venture out again, perhaps to South America, but for now it's great to be home. 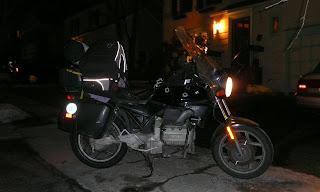 Posted by Peter Bodtke at 1:06 AM No comments: 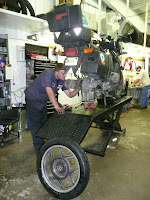 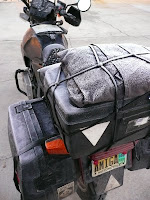 Thursday I reached Atmore, AL, (about 1.5 hours south of Montgomery, Al) and had to stop for the night to join the WorldVistA leadership tele-conference call. It was dark and getting cold, so stopping at 7:00 PM wasn't such a bad idea. I'm now waiting for the frost to melt on the motorcycle and will head to Hendersonville, NC to visit Kevin and Karilea.
Posted by Peter Bodtke at 7:55 AM No comments: 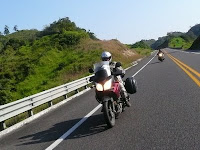 John, Tom and I rode hard for over a week, from northern Costa Rica to the US/Mexico border. Monday afternoon John and Tom split off to head to Austin, TX and I headed towards Houston, TX. I crossed the border into Brownsville, TX Monday night. After a night of rest I will pack up and head to Houston to see David Whitten, then start working my way east.
Posted by Peter Bodtke at 9:27 AM No comments: 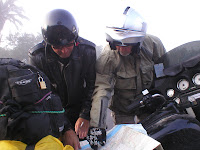 I linked up with two gringo riders, John and Tom, in northern Costa Rica, just south of the Nicaraguan border, and have been riding with them since. Each day we have ridden as much as we could. We are now two days from the US/Mexico border.

I was very fortunate to ride with Tom and John. There are the practical matters like of having someone to watch your bike while you go to the bathroom, but more so they have been great fun to travel with and I have learned a lot from these riders. 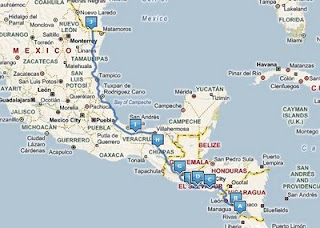 By final tally we covered ~2000 miles in 8 days, which breaks down to roughly 250 miles per day. On the surface that does not appear to be impressive in terms of miles logged per day. Bare in mind that effort includes crossing the following frontiers: Costa Rica/Nicaragua, Nicaragua/Honduras, Honduras/El Salvador, El Salvador/Guatemala, and Guatemala/Mexico. The countries are shown twice and in pairs because with each border crossing you must process the paperwork to checkout of one country and complete the paperwork for the next. Also consider we were up and on the road (most days) near dawn and for safety stopped before sunset to find lodging.

Sorry for getting behind on the postings. My schedule has been insane, between riding, meetings and, yes, having fun. I may be home as early as 2/8, but weather is the great unknown.
Posted by Peter Bodtke at 6:18 AM No comments: