I spent three night and days in Itacaré. Four hours south of Salvador, this beach town is a tropical paradise. A friend of mine built a house there and said I could stay there, rest up, for as long as I wanted. The danger being, the longer you stay, the harder it is to leave.

On the night that I arrived I followed friends up a dirt road to Andy's house. The road is hard, said Dorthe. I had no idea and soon made the mistake of stopping part way up the ever so steep hill. My front tire couldn't provide any traction and the back tire, try as it might, couldn't find purchase on the dirt and gravel. The motorcycle started sliding backwards with increasing speed, until I finally dropped it on its side. The luggage was taken off and transferred to the car that had returned to investigate my absence. How embarrassing, to have ridden thousands of miles, only to drop the bike on a strong incline...

Shortly I was installed in Andy's amazing hillside house. With beer and moonlight, the only thing to do was to take a swim.

The next day, the first order of business was to go to town the long way and return via the beast of a hill up back up to Andy’s house. I couldn’t let dropping the bike the night before stand without a rematch. The next time, without luggage and plenty of throttle, I bested the incline.

Over the next few days I found an Irish bar/restaurant that poured my first gin & tonic in a long time. I eat an amazing veggie burger with mango chutney, went to the beach, found an Internet café that would let me use my own laptop. The first service I found had a policy barring customers from using their own…go figure.

Down the coast I watched guys tightrope walk. 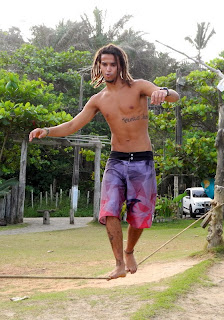 My last full day in Itacaré I found one of Andy’s friends, Silvia. She owns a hotel and dates another friend, Alex, who owns a bar. He was in New York the first few days I was in Itacaré. That night Silvia threw a dinner party and I was invited. Dorthe and Barbara joined us for dinner and a few more locals. One of the guests I had met years ago in Jersey City, at his loft party. Now he runs a restaurant and restores buildings to their original state. The restoration is complete and different from a renovation, which might ignore the original character.  His name escapes me now…

Packed up and ready to head south, I stopped to get advice from Alex on what town to stop on my way to Rio de Janeiro. He told me about a little beach town south of Porto Seguro, called Arraial D'Ajuda. Take the ferry and I’ll find a tranquilo town. Traveling further south he said I would run into more mangrove swamps than beaches. Thanks  for the advice! I headed out to ride ~236 miles. It would take about eight hours to arrive in Porto Seguro, where I was taken in by professional clown.
Posted by Peter Bodtke at 7:57 PM