Lake Titicaca is split in two parts. The eastern half is in Bolivia and the western half is in Peru. I wasn’t ready to cross in Peru, so staying in Copacabana, Bolivia, was an obvious choice and the town came recommended.
To get to Copacabana, you have to cross from one peninsula of Lake Titicaca to another, on what was called a ferry. These ferries are more accurately described as a floating box with an outboard motor attached. If you were generous you might call them a barge. They transport anything with wheels across the water. Trucks, buses, you name it. The boats ride close to the water as they lumber across the strait. 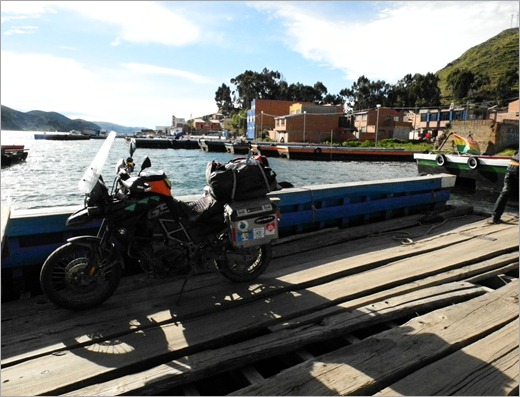 One of the scary aspects is the ever so old boards that comprise the floor.
It was tricking turning around when it was time to ride onto the shore. 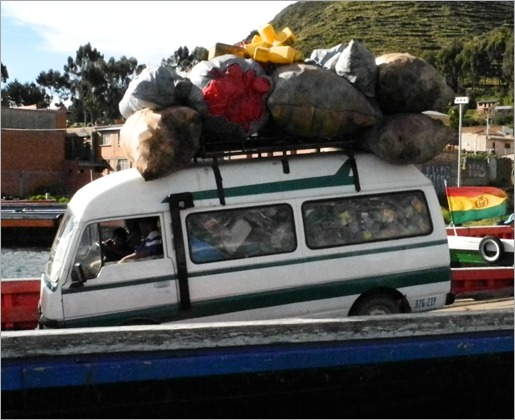 This van caught my eye. I was wondering how heavy the cargo was, until I realized it was loaded and stuffed full with plastic bottles. it might have been the largest volume and lightest cargo all day.

After leaving the ferry I was riding along rural countryside that might pass for Scotland. 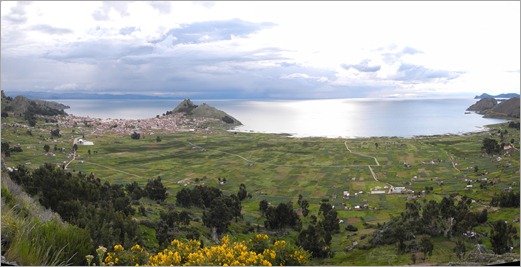 The approach to Copacabana

Daniel | Mario | Guillermo
Per my method, I ride around a new town, getting acquainted with the layout and looking for big bikes. I found two BMW 1200 bikes parked in front of the main church in the centro.  I met two Mexican, Guillermo and Mario, and a local guy, Daniel. They were all in the restaurant business. We quickly agreed to meet for dinner and I headed of to the Miridor Hotel to check into that lakeside hotel. 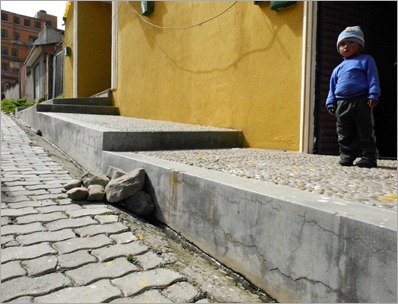 A rock ramp I rode up to park the motorcycle at the Miridor Hotel. The sketchiest “garage” entrance I ever encountered. Even though I am not Catholic, I crossed myself before hitting the gas and climbing the rock pile.

Daniel, Mario, Guillermo and ate and drank into the night. They were headed south and I am headed north, so we swapped adventure stories and tips on places to see and great restaurants to eat. Mario harassed me about the state of my front tire, which I had neglected to change for a tire with more tread. I promised to change the tire in the morning…and I did the right thing before leaving town. 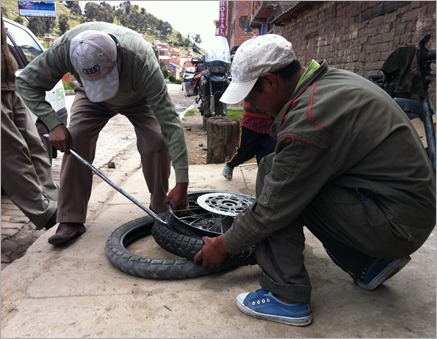 Daniel recommend that I go to Jose’s to change the tire. 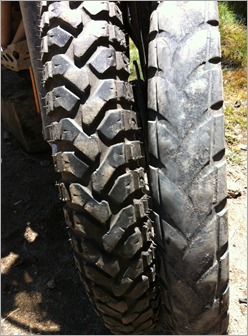 Mario was right, I really needed to change the front tire. 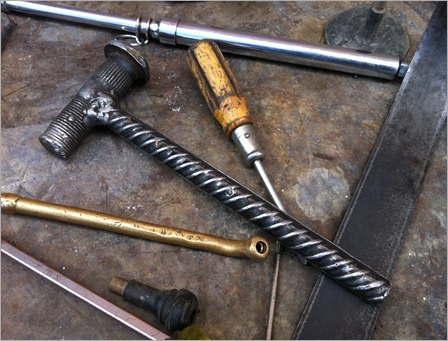 Check out the homemade hammer from the mechanic’s toolkit.
Posted by Peter Bodtke at 11:29 PM