With minimal fuss I found the route out of Cusco, Peru, but while climbing the hills on the western edge of town noises started coming from the back wheel. It was a collection of clacking and scrapping sounds. A check of the chain revealed the tension was correct. Inspection of the front and back sprocket showed all of the teeth in good health. At this point I was joined by two riders from Spain. Testing the back wheel by pushing the wheel side to side produced wobble. The wheel was not properly fixed to the axel, demonstrating "play" on the left side. The Spaniards gracious help remove the tire, to see if various parts had been reassembled correctly after the Honda dealer installed a new tire. Indeed the source of the looseness was on the left side of the internal part around the axel. One tube like part was flipped and the wheel assembly put back together. The fix seemed to work, but soon the noises return along with wobbliness in the back tire. The wheel was no properly seated on the axle. 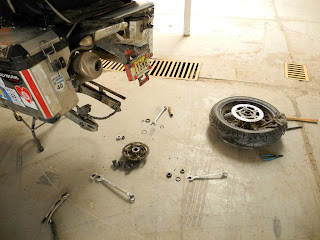 Saying goodbye to the Spaniards, I limped by to the Honda dealer in Cusco. Soon the mechanics had the back wheel off and internal parts disassembled with alarming speed.

My impression was they were mechanic monkeys, yanking apart the guts of the wheel with abandon. The diagnosis was bearings. Indeed some of the bearings were split in two and another was deformed. They claimed to be able to find replacement bearings in Cusco with research and by taking the wheel to find an exact match. 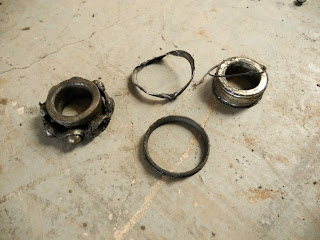 I went to lunch and when I returned I found the work bay empty and my tire sitting on the shop floor. The mechanics had gone for lunch, a Latin lunch. See you in an hour and a half or two...or three as it turned out. At this moment I am waiting...and hoping. Fearing the worst, I imagined that the boys would fail to be able to find a set of bearings that would fit and the shredded gaskets would allude their search. My mind started spinning with options, have the parts sent from Lima or take the tire to Lima by night bus.  I would give Honda until closing, then take extreme measures as needed.
On the upside, while I was waiting, I had a lovely lomo sandwich and pitcher of mixa jugo for lunch. Later I stopped for a Coke at a rock in' fish restaurant, but I wasn't in the mood for a big meal. Sadly they are only open during the day. 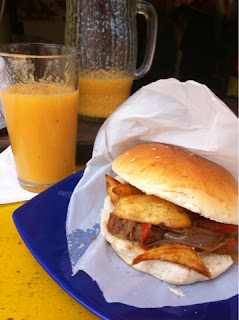 The mechanics returned and got to work. Shortly two of them rolled the wheel down the street a bearing vendor. A little while later one of the mechanics when up the street with a gasket in his hand. I went heads down editing video clips and writing blog posts. After an hour and a half I was approached. Fearing the worst, instead I was asked to test drive the bike. Checking tire for wobble, none was to be found. Drove down the block and back, all is good. I felt bad about thinking of the guys at Honda as mechanic monkeys, cause these guys rock.
So, I am back at the same hostel the I love and will get an earlier start in them morning for Nazca.