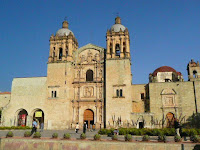 It's 5000 feet above sea level and like the better know base camp at the foot of Mount Everst, I am readying myself for the next leg of the trip south. There are at least three large cathedrals in Oaxaca, several museums and art galleries are town. My focus was on work for this leg, so sadly I didn't take in much in the way of culture, except language. I staged myself in Oaxaca for 2 weeks, primarily taking Spanish classes and setting up logistics for the next phase, to Belize. 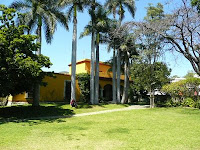 Ingrid and I are meeting in Belize for a 10 day vacation; her work schedule influenced my itinerary and allowed me to lay over in Oaxaca for an extra week.

My niece Kelly has been living in Oaxaca and working at the Instituto Cultural Oaxaca. It was the natural place for me to take classes. The price was great, my fellow classmate fun and the teacher, Betty, was the best.

I took 9 days of classes, but I learned lots of vocabulary and how to conjugate a few verbs. I am understanding more Spanish, but piecing everything together into a semi-complicated sentence is still a challenge. Fortunately, I know how to order beer and for the locatio of hte bathroom. I need more down time to study and to transcribe my notes. 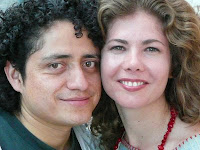 My niece, Kelly is dating an great guy named Abraham. He is an actor here in Oaxaca and is involved in the management of a non-profit theater company. As an actor is is very successful; recently he was in three plays at the same time. On October 31st we travel to the hill on the edge of town and had dinner with Abrahams family. We had hot chocolate made as they do in Oaxaca with water, and big chucks of dry, crumbly bread that you dip into the hot chocolate. We feasted on homemade tamales, and chicken with their own black mole sauce. It was amazing. Apparently mole sauce is made over the course of several days. It a true labor of love, and the love maked the food taste out of this world.

I don’t know enough to describe recent Oaxaca civil history, but observed “revolutionary” posters and several gatherings of Communist groups in the town center. Che is really big here. You see t-shits everywhere with his image and book stalls are loaded with books about his life.

[Let there be Salsa!]
There are a fair number of "punk fashion folks" here. Then there are salsa bars and a few edgy water holes as well. Kelly's favorite bar is also mine. I call it “Bar 1, 2, 3” or “Triple Bar” because it’s three bars that have doorways from one establishment to the other. On one end is a rock club with live bands. At the other end is a hipster/Goth bar. In the middle is best described as a college coffee house environment that serves drinks and various milk shake concoctions. The middle bar, La Fandango, supplies board games and features a large map of Mexico that I studied several times to plan the next leg of the trip.

One Friday night we went out to Café Central for live music, drinking and dancing. I was knocked out by a group called the Dolomites. It is basically Israeli singer/performer, based in Japan, that picked up a goovin Mexican band and is touring the Americas. The sound was modeled after Tom Waits. It was a total unexpected event. We partied late into the night dancing and hanging out, finally wobbling home in the small hours of the night. 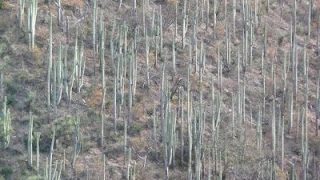 Thursday, early afternoon, I left Oaxaca immediately after Spanish class. Here are photos of the landscape that I was too pressed for time to capture on my way into town. The mesas remind me of the Grand Cayon, only on a smaller scale. The Zona Cactus. At first there was one cactus, then more and more, until they were everywhere. This puppies are as tall as telephone poles!

Who would think there are snow capped peaks in Mexico? I started wondering if anyone have tried skiing or snow boarding these slopes.

Soon after I passed this mountain I climbed and then crossed over a ridge. The environment was completely different on the other side. Now I am above the clouds, where before there weren't any. There is lush vegetation everywhere. I am entering a completely different part of Mexico.