I returned to the Mexico/Belize border on Sunday late morning. Having turned in my tourist card the night before, I no won't have the form to surrender, again. There was some discussion and finally the official that collects the tourist cards allows me to pass. I had gone into Belize the night before and cleared Belize customs and acquired a (free) motorcycle permit. Now all I have to do is wait for a couple from Belize to get their Mexican vehicle permits, which took about an hour...canceling my motorcycle permit took 2 minutes. I cross the border and buy insurance for the motorcycle. Before I leave Belize my paper work is check no less than three times in various parts of the country. Insurance is very serious stuff in Belize. Not have coverage can bring a fine of $1000 and jail time. 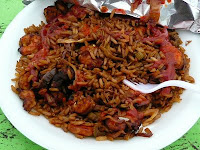 About an hour later I am navigating the streets of Belize. Naturally I find the worst section of town. I try to find the good part of town, but it is never clear to me. I think I was close, near the north part, but in the end Belize City is not the best example of the country. I stop at a seaside park, buy a "Shrimp Box" lunch of rice and shrimp, and start reading Lonely Planet for tips and to locate a hotel. There is a heavy Caribbean influence, with lots of Rastafarian wannabes. The scene on the street is fairly aggressive and tiring. I was eager to move on. 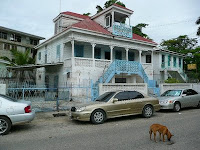 Driving around I never find the first hotel and finally settle on the Sea Guest House. Run by boys from Bangladesh, is a bit thread worn and over priced. In the photo it's hard to see, but the dog on the road is checking out a dead rat. Nice. 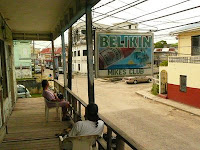 Later that night I go out to find a dinner. It's Sunday night and almost everything is closed. I cross the Swing Bridge and follow the sound of music to Mike's Place, a reggie karaoke and pool bar. I settle in at the bar, order a Belkin (the national beer) and enjoy "pumpkin pie" which is closer to a bread than what we know of as pie. They are playing snooker, the game with three balls, not the lind of pool more common in the US, with pockets and 8 balls. These guys are really good, so I skip the chance to embarrass myself.

“People here have one job, not three. They don’t have much money. They are all happy.”
(from a conversation at Mike's Place)

Next next morning I return to the Swing Bridge, to take a picture of Mike's Place and find breakfast. Sitting on the back deck over looking the Swing Bridge I notice a film crew capturing footage of the bridge. They are students from Montreal, Canada working on a documentary about Belize. We will cross paths no less than three times in Belize. At the restaurant where I'm getting breakfast, a waitress gave me advice, I should move my camera from the back to my front, because some locals are “spicy” and might take the camera. I was saddened to receive the caution, but loved the language. The locals are a bit tough here and the south city is poor. All told, I had no problems in Belize City.

I expected Belize City to be the capital of Belize, but find the government has mostly moved to Belmopan, an hour west. Time to pack up and go west...as soon as I can clear the driveway which is now blocked by a car. Spent over 30 minutes looking for the owner and finally scrapped my luggage and two bumpers as I left. Oh well.
Posted by Peter Bodtke at 10:15 AM