In Laredo I picked up liability insurance, cashed traveler’s checks, and exchanged dollars for pesos. I got great advice at a Texas tourist info center on where to find liability insurance in Laredo and how to avoid traffic on my return leg.

"Hey Buff, it's Peter, I'm in Texas about to cross the border into Mexico!."
"Out of sight man."
"Yeah, I'm going to get through the paper work, tourist card, and temporary import permit for the motorcycle on the other side and put as much distance as possible between me and border, as quickly as possible."
"What are you --Butch Cassidy?" I crossed the bridge and immediately am in a different world, one where I am the visitor, the tourist, the alien. The visual overload confusing and traffic was congested. It reminded me of Puerto Rico and a few streets in the South Bronx’s.

Crossing the border I was waved through the declaration check point. The first 50 miles sound of the border is a "free trade zone" there you don't need paperwork for you vehicle. If you go further south there are check points where officials check for the sticker. I found the office got my tourist card and temporary permit sticker for AMIGA. Windows 1, 3, and 4.

Now back out in the parking lot where I left the motorcycle parked near security guard and start organizing my paperwork. Where is the temporary import stick? Returned to Window 4, where the clerks are smiling and waving the permit sticker I had forgotten at the window…

The Garmin Mexico map isn’t very detailed for the section of Mexico that I am traveling, but get the job done, mostly. The bike icon is offset from the road. Need to call Garmin to see if it a matter of calibrating the device or is that simply the way it works.

As I got into the edge of town I pull over for gas, but learned that they were out. A few miles down the road I passed a gas station on the other side of the road. I didn’t turn back…there has to be another gas station soon. Anyway, I’ve got a half a tank of gas. Between Nuevo Laredo and Monterrey Mexico, there is a long and lonely stretch of dessert. The road goes over two small mountains. On the second mountain the engine started losing power; I'm running out of gas. I pulled over and poured gas from a small aluminum bottle. Everything is honky dory again. Unfortunately the bottle doesn’t hold much gas.

Its dusk, the sun is setting and as the lights of Monterrey came into view I ran out of gas. Now it’s dark, I’m out of gas on the side of the road and it’s my first day in Mexico. Cars are flying by and no one is even slowing down. After a few minutes Miguel comes to my rescue. I ask to siphon gas, but Miguel says there is a special trap that “protects” the tank from siphoning. I try anyway, until it is obvious that I will kill myself before getting any gas from his car.

I strip the bag off of the bike and we scream to the first PEMEX. Pump gas into several bottles and started to head back to the bike. Yikes! The bottles are leaking! Gas is collecting in the plastic bag and has spilled into my helmet. We stop, get rid of the bag, tighten the bottle, and race back to the bike. AMIGA is still there, safe and sound. Miguel won’t take my offer to buy him dinner or any kind of money. I give him a VistA Tour business card and thank him profusely, offering to buy him a drink if he ever gets to NYC.

Worked my way through Monterey and found a business hotel for the night. I decide to treat myself, pay a bit more by have a low stress place to sleep for the night. Across the highway there is the Mexican version of a 7-11 Store, called OXXO. I buy a loaf of bread, Virginia ham, cheese and a beer. Internet service not working at the hotel... 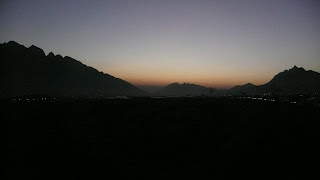 Made it to San Luis Potosi before nightfall.

The last hour rode through the clouds, cold to the bone. Drove around the town center and asked a policeman for direction to the hotel – in Spanish! Now happy as a clam in my wonderfully overheated hotel room. 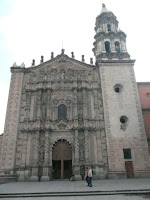 The next morning I returned to the city center and take a few pictures of the church. The stone work is amazing. No time to lose, but I will certainly stop and top off the gas tank and add air to my tires. The bike is surviving the bumps better with more air in them.

The goal is to get to the other side of Mexico City, to Puebla by late afternoon. Foolishly I took the highway that passes Mexico City and hit rush hour. The roads are not marked well and what I think should be major roads are closer to city streets. I got mixed up a few times, run into serious congestion several times and road construction… I saw the airport and other side streets that weren’t on my itinerary. Simply making a u-turn took 10-20 minutes in some instances.

As I first got to the edge of Mexico City I needed to find a bathroom, but planned to get to the other side and stop at a gas station. Traveling alone it is difficult to walk away from the fully loaded motorcycle, so I try to pick a gas station on the edge of town, without lots of people hanging around... Little did I know that would be 2.5 hours before I would find that bathroom. I finally climbed a mountain southeast of town and stopped at a strip of shops. I waived to the staff of a restaurant and found the “sanitary room” to great relief.

An hour later I’m navigating the streets of Puebla, looking for what is now my favorite hotel chain, CityExpress. I passed my first “love hotel”, but that is not what I wanted! I decide to try the Holiday Inn, but all they have is a room in the “smoking zone”, no thanks. I head back the center of town and finally hire a taxi to take me to the CityExpress hotel.
Posted by Peter Bodtke at 5:52 PM