I head out of Oxaca on Thursday afternoon, immediately after my 9th Spanish class, pretty much on schedule. I find my way out of town and onto the highway. The route to Belize can be done in different ways, such as through challanging mountian roads, but I'm interested to get there quickly and in one piece, to met with people in the Belize Ministry of Health and then join Ingrid down the coast a few days later. The plan, take the toll roads, the longer in miles, but shorter in time and easier on the motorcycle. To see the route in detail click here and you will be transported to Microsoft's mapping service, Maps Live. The mapping service has gotten better since I hit the road. Now multiple waypoints can be combined to create a more complicated route. Once the route is calculated, the waypoints can be downloaded to a GPS. Cool beans.

After a ride though the mountain ranges and over the divide, into moist and lush eastern Mexico, I spend one night in Cordoba, Mexico. Dinner was found at resteruant just off the park in the center of town. A dance competition was under way in the park. Not much to say, found a hotel, slept, got upthe next day and hit the road. Breakfast at a road side, tacos and coffee, the breakfast of champions. Now it just miles, as many as I can cover in one sunny day. As I cross the state of Tabasco the weather is great, I got an early start, and everything is dandy. Music in my ears, no worries, then in the middle of no where, doing ~60 miles per hour in the left lane, out from the elephant grass filled medium strolls a dog. He causally walk out right in front of me. I hit the brakes, not an emergency stop, but enough speed was lost and the dog's attention was gained...a close call. For me and the dog.

The balance of the day rolled on, citys passed by, swamps and lakes appear and recide. Afternoon turned in evening and now I'm into the Yukan and no immediate place to stay. I push on into the evening to reach Escárcega. The land is low lying and the bugs come out in mass at night. I had to stop more than once to clean off my face shield.

I hit town and found a cyber cafe. Checked in with Ingrid via Skype, grabbed email and head out to find lodging for my and the motorcycle. I simple enough hotel was secured and bite to eat is next. I like to go to places that are patronized with locals and busy. My second round of tacos, dinning with couples, families and a cowboy. This rocks. To end a perfect day I am looking for a beer, but first some background.

My motorcycle license plate spells "AMEGA", the gender specific Spanish for friend. Motorcycles are feminine. Quick history, the last person, Ed Cumberson, to cross the Darien Gap (the rain forest between Panama and Columbia) rode a BMW with the license plate, AMEGO. He wrote in the book that documented his achievement, and notes that the gender was incorrect, motorcycles are feminine. I thought of naming the bike MLC (for mid-life crises) and when the topic comes up in conversation I quick agree. The motorcyle is cheaper than a red convertible and less taxing on my marriage than a mistress...but I digress. AMEGA becomes her official name, license plate and everything. Across the street from the taco joint I find a bar called, "El Amego Peter Bar." That is too funny in my book, so I go in and have a quick cold one. 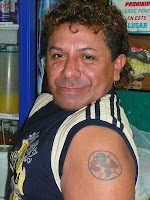 Its an amusing bar, filled with locals having a screaming good time. Popcorn is tossed and banter flows. On my way out of the bar I stop and talk briefly to the owner. No surprise, his name is Peter. I show him my motorcycle registration and he gets it, smiles all around. 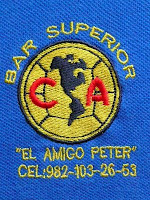 The next day I stop back at the bar to take a picture of the sign. The owner is there openning up. This time I show him the license plate and in a moment he invites me into the bar, then disappears into the back. He emerges with blue cotten polo shirt, repleat with the bar name and logo. Two beers on me to celibrate the joys of being Peter. I took a picture of his ink as well, which matches the logo on the shirt. The "CA" stands for Central America, which is imposed over a soccer ball, or football as they call it here.

Another sunny day and I'm headed east towards northern Belize. My route will take me north of Guatemala, so I don't have to cross into and then out of a border. Each crossing takes time and sometimes there are fee. Hassles are always the case when crossing a frontier, best to avoided when possible.

Less than an hour out of Escárcega I am not feeling well. The traveler’s blues that has been bugged me, on and off, ever since I arrived in Oaxaca. Currently my digestive track is going through a slow twisting motion. There is no getting around or postponing this call or nature. Finding a turn off into the woods I pull over and answer the call. Evidence strongly suggests that this particular spot has proven convenient to others. For the balance of the afternoon I slowed down the pace. While I was feeling better, I was somewhat drained. I mention this because the subtle slow down would have a larger impact later that same day.

Now running low on gas I am looking forward to reaching Xupjil, Campeche, Mexico, the next point on the map. I ride around this sizable town and can’t find a gas station to save my life. How can a town this large not have a ready supply of petroleum? I determine to get food, chill out and get direction. The waitress at the restaurant had no patience for the likes of me and my struggling language skills. I comprised and order chicken tostadas, when I was really want chicken soup. I was close in my description, but she must have seen one too many tour buses roll in that week and wasn’t in the mood to work for yet another tourist that was mangling her native language. I got through it all, got directions to a gas station in the bicycle/hardware shop next door and hit the road. It turns out the PEMEX is 5 kilometers away, in the middle of nowhere. From the center of town it’s 10 kilometers, there and back. It seems to me that the remote location adds to the overall sales of gas, because each purchase requires a 10 kilometer trip to fill up.

At times I’m traveling by braille. A quick glance at the map and I assumed that Chetumal, Mexico is the most northern town in Belize. Turns out it is the southernmost Mexican town on the Belize border. I arrived on the outskirts around 5:00 PM, got my bearings, made a U-turn and headed south to toward Belize. Riding a motorcycle it is acceptable to cut to the head of the line, it’s just that way in Latin America and I am all for it. I find the typical chaos of a border town, like going to Las Vegas, except the streets are narrow, there are few signs and people milling about everywhere. Finding the booth to surrender my Mexican tourist card (it’s more like a form than a card) was no problem. I asked where to have my motorcycle import permit canceled and got vague instructions. I proceed and before I knew it I was in Belize. Alright I’m here, so I got my tourist visa, and the temporary import permit for the motorcycle. In Belize, an official goes out to the bike and checks the VIN number. If you time it just right, like I did, at 6:00 PM they take the Belize flag down and everyone with a uniform stops dead in their tracks and faces the flag pole. Nothing moves until the flag was down, folded and being carried away. The border officials take patriotism very seriously. I’m digging it.

International borders are unique. You legal status only makes sense to those that know the rules, and then there is some wiggle room. I failed to get my Mexican temporary motorcycle import permit canceled, so I turned back from Belize and return to Mexico. It will be a huge hassle down the road, mostly when passing through Mexico on the return leg if I don’t have my Mexican permit canceled. So I go back over the bridge and find out that the office to cancel a permit is the same office when you request a permit when arriving from Belize. The permit window is on the northbound side, which is an arrangement efficient for the Mexican officials, but the lack of signage is confusing to the uninitiated. Before finding the permit window I am advised that the office is closed, and it might not be open on Sunday. It gets even better, Monday is holiday in Mexico; I might have to wait until Tuesday to cancel my motorcycle permit and cross the frontier into Belize. It’s like hitting the trifecta at the race track, only in reverse. No getting around it, I will spend another night in Mexico.
Posted by Peter Bodtke at 7:30 PM