Its 89 miles from Paramaribo, Suriname east to the frontier port of Albina. I said goodbye to Alex, my first CouchSurfing.com host and coursed my way through Paramaribo. Across the bridge spanned the Suriname River and I was clear of city. 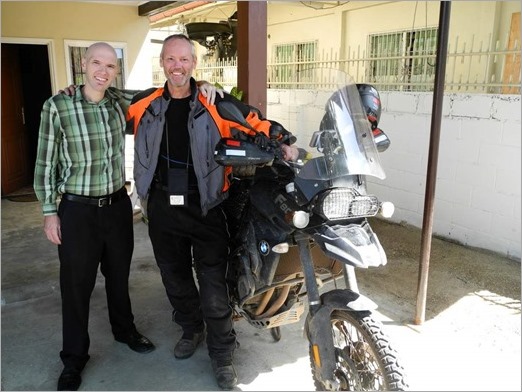 Along the way I spotted cool public sculptures. 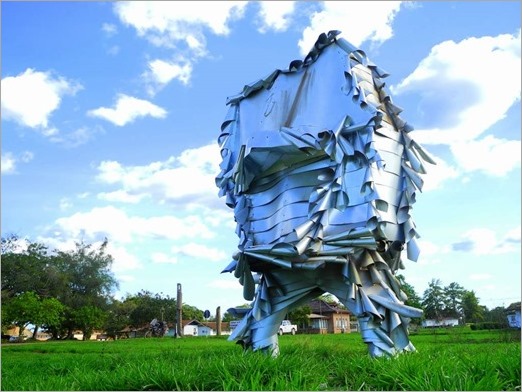 The road east of Paramaribo was patchwork rough, then turned into construction, with long stretches of dust and gravel. 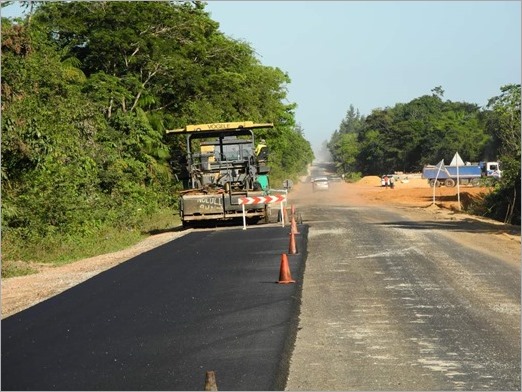 Construction slowed travel and added time to the trip. There is a morning and an afternoon ferry crossing to French Guiana each day. At this point I was going to catch the afternoon ferry. Miss the ferry and your stuck until the next day or you are shopping to hire a boat…
It isn’t as simple as pulling up, buying a ticket and getting on the ferry. First you have to cancel your visa and surrender the motorcycle importation paperwork. I have been through so many frontiers, I was sleep walking through this one. After I found the audana/customs official, I put my passport and importation papers on the desk and tuned out. Getting out of a country usually takes no time at all.


Now the official is asking how long I was in Suriname, did I enter on such and such a date.
Me: “Yeah, yeah.” I replied without really listening.
Official: “You over stayed your motorcycle importation.” That caught my attention.
Me: “What?”
Official: “The importation date was 10/05/2012. It is now 11/15/2012. The importation visa was over stayed.”
Me: ”Wait, no, I came into Suriname on 11/05.”
Official: ”The document is dated 10/05, this is a big problem.”
Me: ”Hmmm, my passport is stamped 11/05…and yes, the motorcycle importation date recorded is 10/05…and we came in together.”
Official: ”This is a big problem.”
Me: “No, this isn’t a problem. This is a typo. When I entered Suriname, the official wrote the “10” instead of “11”, and its not my problem, its your problem. This mistake was made by a Suriname official, not me.”

The next sound was the sweetest sound you can hear on the frontier, the whack of the passport exit stamp. Done, out of Suriname. 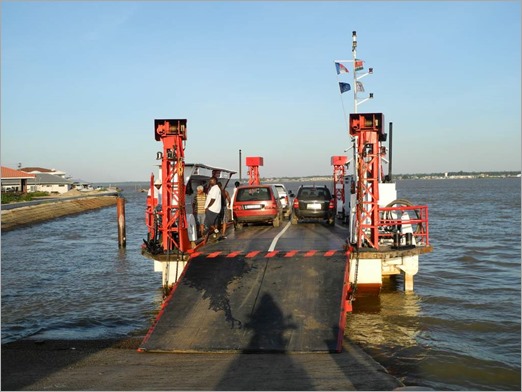 Ticket in hand and waiting in line, the ferry arrived on schedule. 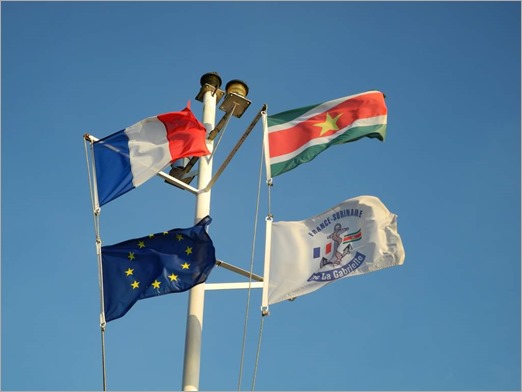 Next stop, France and the European Union. 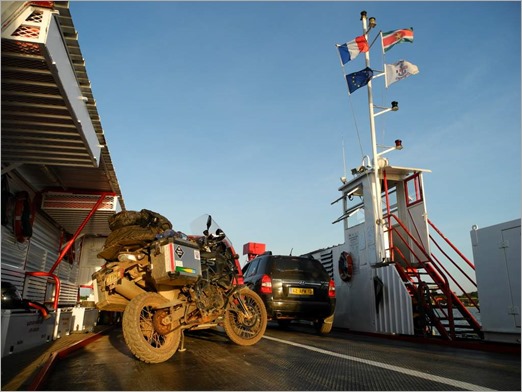 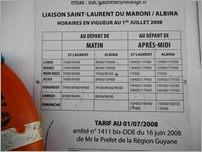 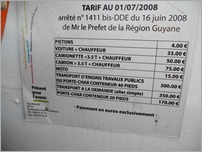 The ferry schedule and price as of November 2012 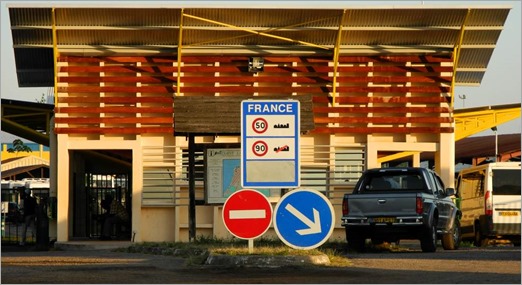 I had been trying to get short term liability motorcycle insurance coverage for French Guiana, since entering Guyana. In Paramaribo I spent a day calling and visiting insurance offices seeking insurance for French Guiana, no luck. I even went to the French Embassy in Paramaribo to ask for advice. I left without a solution, but did get a business card from the business development officer. Now I was at the immigration/customs counter, trying to get into the country. Passport, check. Registration, check. Title of Ownership, check. Insurance? Huston, we have a problem.
I listed all of the insurance companies I had contacted trying to buy insurance. Then I produced the business card I collected at the French Embassy in Paramaribo, where I visited to ask for advice... I explained that I tried very hard to buy insurance before entering French Guiana and found it impossible to secure. The official asked, “Did you try the Internet?” My reply, “That is a big place, can you tell me where on the Internet I can buy insurance?” The customs official frowned a lot, made a phone call, and finally, with promises that I would look for insurance in the morning, he stamped my passport. Cool, I am in French Guiana.
There were two guys hanging around watching my struggles to get into the country. They were French ex-pats living in French Guiana. They told the customs officer they would get me to the next town, where hopefully I could get insurance. I’m cool with spending the money, just make it possible. I really would try  to get insurance…
We got clear of frontier and stopped for gas. One of the guys, Yannick, asked if I would be interested riding to Cayenne that night. I had been traveling for about six hours, but had plenty of energy and welcomed following someone across French Guiana. It took three hours from the western town of Saint Laurent to Cayenne, and Yannick wasted no time getting us there. I had to remember my performance turns training, leaning into the turns, laying off the brake. That was the only way I could keep up with Yannick. Its not so bad riding at night on unfamiliar roads, as long as you are following someone who knows the way.
Yannick invited me to stay in Cayenne with his family. He has a carriage house that a friend uses, with plenty of beds, no worries. When we arrived Yannick’s wife laid out a late night spread for us. Cheese, bread, sliced meats and wine. I had been transported magically to France. 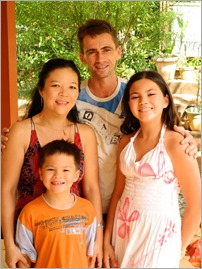 Yannick is an independent/consultant gold prospector. He know where to look for gold and his direction always returns a profit for his customers. Presently he was going through the paperwork to start his own mining operation. One night he detailed his “system”, which was a breakdown of all of the costs associated with a small mining operation. Food, equipment, crew and the government percentage. In the end he had to extract one kilo of gold ore per month to make the operations profitable. As he described his system, I remarked that I was feeling “gold fever.” His deadpan replay, “I don’t have gold fever. Its just work.” He approach was pure business and economics, coupled with a few strategies no listed here to preserve his competitive edge.Yannick showed me a huge nugget, one that was beyond my budget. 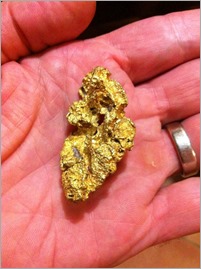 There was an assortment of smaller nuggets, one of which was in my budget. Each was priced purely on weight. Unique, small enough to travel with, comes with a story - Ingrid’s Christmas present only needed to be selected and a follow-on trip to the ATM. Done. 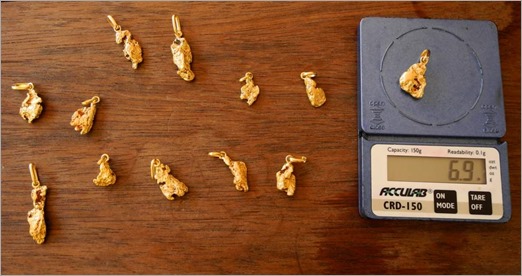 I spent three nights in the suburbs of Cayenne, in Yannick’s carriage house with Sebastian, a gold miner that sometimes works with Yannick. Sebastian is a gold miner to the core, well adapted to months in the bush. He speaks the native languages and knows the jungle. I think he could have a career as a model. 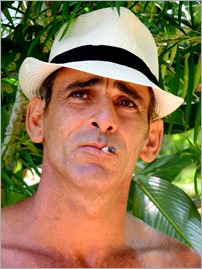 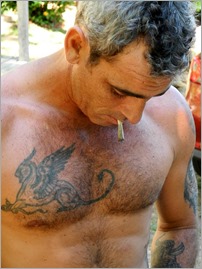