Brazil is known for its friendly people, music, soccer, slightly higher gas prices and the large distances to cover when traveling through this leviathan country. The trip from the dunes at Lencois on the Caribbean to Recife on the Atlantic would span 1000 miles. I covered the stretch in two days.
On the second day, I spotted a telephone pole factory by the highway. The visual design of telephones poles fascinated me. Why make telephone poles out of cement? My only guess, its cheaper to manufacture telephone poles from cement, then to source wooden poles. It could be that no one will steal a cement pole for firewood. I really don’t know.
Another long monster day, riding ~550 miles in the dry north of Brazil, ending with a midnight arrival in Recife.

I had several Couchsurfing.com invitations in or near Recife. All of the hosts had interesting profiles. There was a film maker, a lady who invited me to party in the countryside and Veronica, who rides a motorcycle. The choice was obvious to me. I was in touch with Veronica, letting her know my approximate arrival date and sharing the link to the SPOT satellite tracker, so she could see my location. From her Couchsurfing.com profile I knew she lived with her mother and went to bed early. So, when I hit Recife near midnight, it was too late to show up. Veronica’s house is in the suburbs of Olinda, on the north side of Recife. After trying several “love hotels” (hotels that rent a romantic room by the hour) I settled on one in Olinda and waited until the morning to contact my host. 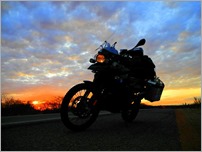