I reached the north Atlantic and Recife too late to go to my CouchSuurfing.com host's house. I spent the night in a love hotel, pay by the hour properties. In the morning I navigated as close as I could to Veronica’s house in Olinda, a northern suburb of Reife. As with many addresses and sets of directions, actually arriving at a given destination requires interpretation and usually the advice of a local.  A friendly pet shop owner placed a phone call me and moments later Veronica showed up on a bicycle. 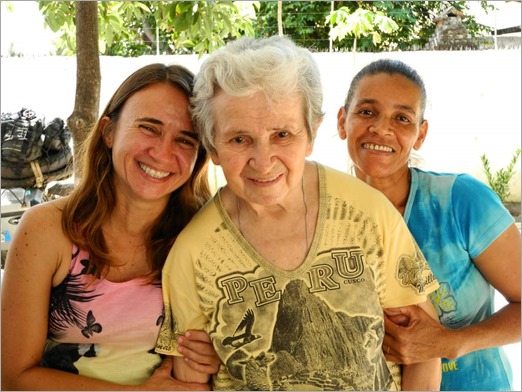 Veronica lives with her mother, who has Parkinson's disease. There is a nurse in attendance 24/7 to assist her mother. My Portuguese is worst than my Spanish, but I learned a few words to say to her. Despite her physical challenges, she is a ray of sunshine.

That afternoon Veronica and I jumped on the motorcycle and went to see Francesco Brennard’s ceramics studio, Oficina Brennad.  The studio and gallery is housed on an roofing ceramic tile factory in Varzea the outskirts of Recife. His work is very whimsical, cartoon like and powerful. Sadly, my camera battery ran out of juice shortly after arriving. After visiting Brennard's workshop and galleries we went into Recife where we saw more of Brennard's work installed in public sites and visited a art and craft show. Veronica also showed me around the old sections of Recife, so cool

Later we rode to ridge above Olinda where we could see Recife and enjoy Tapioca. I think of tapioca as a pudding, but in Brazil the plant is used to make a white and semi-doughy pancake, that is stuffed with all sorts of fillings, meat, fish, fruit, chocolate cream… Near the food vendors is a small observatory where we viewed the giant spot of Jupiter and the Moon. They were drifting through the night sky together.

On the second day we drove to the beach above Olinda where Ark Angels, Veronica’s motor boat is kept in a marina. The boat was being used for commercial tours of the bay and river above Olinda. During the last tour the boat got stuck on a sand bank, so we were on a mission to check the channel at the same time of day that the next tour would be given.

After checking the channel and going for a swim, we anchored by a small island for drinks and a bite to eat. Our waiter has a classic north Brazilian face.

Flowers growing at the marina. 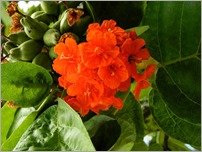 On our way back to the house we stopped for ice cream (again!) at a parlor where Veronica has been going to for years. She even supplies the shop with mangos.

We went into the kitchen where they were making avocado ice cream. How cool.
Brazil is so big it takes a days to travel across. Now I was on the Atlantic coast, near the northeast corner and needed to start riding south. I could have stayed in Refice a long time and had to push myself and stay one more night, then I had to get moving south.
Posted by Peter Bodtke at 12:14 PM