The Bridge to No Where: Crossing the Rio Oiapoque

I always want to stay longer and my time with Yannick, Karen and kids, and Sebastian, was no exception. The schedule pushes me down the road and I must go. The plan is to meet Ingrid in southern Patagonia on December 19th for the holidays and perhaps an extended vacation. I am trying to get to the Horizons Unlimited "mini meeting" in northern Argentina, Dec. 7-9th. This leaves a limited amount of time for Brazil and Uruguay. Argentina is very long, which will take time traverse its length...and see the Valdez Peninsula, the home of penguins, seals, turtles and whales...

Failing to secure the required liability insurance, due to poor commercial support, yet clear government regulations. left me uneasy as I traveled to the frontier with Brazil and the inevitable visit with border control officials. Some days I would rather have a root canal than cross from one country to another. Yannick warned me that there would be a police check point, and indeed there was one halfway between Cayenne and the border town of St. George. This was my second police check point in French Guiana. In some countries the police will ask for your proof of insurance at their check points, i.e. Belize, Nicaraguan, Costa Rica. French Guiana police are more laid back in this regard, inspecting only my passport. As far as they were concerned all of my paperwork was in order. It seems the National Police didn't care if I had insurance or not.

I reached St. George just after dark and went a little further south to a point that looked like a bridge. I had been told that I needed to take a ferry or launch to cross the river and arrive in Brazil, but sure enough a shining new bridge appeared before my eyes. Or so it seemed. Yes, there is a beautiful bridge and a newly painted border control center on the French Guiana side of the river, Rio Oyapock. 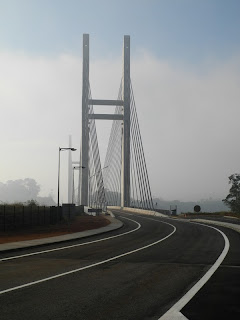 Unfortunately, the negotiations with the Brazilian government was not complete and the bridge not open for use. I will have to take a boat after getting excited about the bridge. The good news, the night border control officer said it would be Ok to pitch my camp for the night! 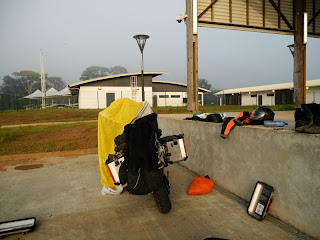 In the morning I learned that the officer in charge the night before did not advise the day officer that there was a guest camping on the loading dock, within the secure area. The day officer made a fuss as I was trying to leave. When asked who gave me permission to camp, the day officer would not acknowledge that there was a night officer by that name. When I next saw this joker at the National Police Headquarters, I would learn later that I was not pronouncing the night officer's name with the correct French accent. He was simply giving me a hard time in a classic French form. Ultimately
I made it clear that I was given permission to camp "for one night" and that at this point I was leaving. Asking if you can "camp" is not the phase to use. Ask if you can put up your tent "for one night." Camping can be a long term affair. One month later you might still be camping. With a huff the day officer gave the word, the gate was raise, and I was gone.

A last moment of tension before getting out of French Guiana. I had to be officially stamped out of the country. If you skip this step, it raises flags in the next country as you request an entrance stamp. Ok, now I had to find the National Police HQ and have an exit stamp applied to my passport. While waiting for the passport to be reviewed and exit stamp added, a car rolls up and the day officer from the bridge walks into the building. My lucky day. The officer was actually on good behavior and I took the opportunity to ask his colleagues if there was a night officer by the name I provided earlier in the day. At this point the exit stamp was in my passport, so busted the chops of the day officer for giving me a hard time earlier. I said good day to the helpful officials and left. I was officially out of the country. Of course I didn't bring up the lack of liability insurance.

Now I had to get across the river. I had spoken with a boat captain the night before and arranged passage for me and the motorcycle. At one point I pitted one captain against another to get the best price. I tipped a few guys how helped load the motorcycle a few dollars and I was soon motoring across water and back to Brazil. 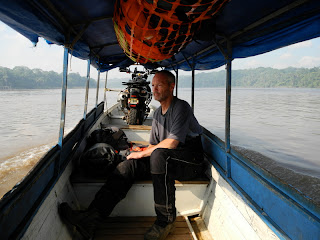 ...as we motored up the river we passed under the bridge that was "not operational" 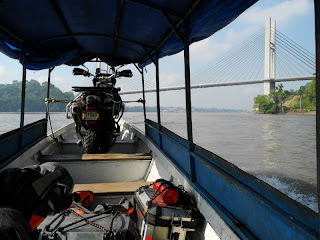 Oiapoque is the point of enter on the Brazilian side. The Federal Police station was not difficult to find and their limited hours of visa processing (mid-day only) worked out well. I had kept my temporary motorcycle importation permit open when I left Brazil for Guyana, so all I needed was a entrance stamp in my passport. I was traveling using my Irish passport, so a visa was not required. For those that are traveling with a US passport it is necessary to get a visa at a Brazilian embassy or consulate before reaching the border.