I use a cool app on my iPhone called World Explorer that returns the most popular tourist sites to see for a given city. The results are rated (somehow...perhaps by elfin magic), ordered by distance from the city center and the locations can be viewed as pin points on a map. After checking out the results for Tucuman, I decided to see the local modern art museum Museo Timoteo Navarro before leaving town. The museum has very nice wooden doors, which do not open on Monday...

Pablo does not share my interest in art and had gone ahead to the next Dakar Rally stage, Rioja. After lunch I followed on a more leisurely pace, stopping now and then to take photos. This must a tobacco drying shed.

These photos are classic misty mountains, I just couldn't resist taking this photo.

Further down Routa 40 I rode past what was unmistakeably tobacco drying sheds. I grew up in rural southeast Pennsylvania, Chester County, where the Amish grow tobacco. See tobacco drying so far from home transported me back to my teenage years... 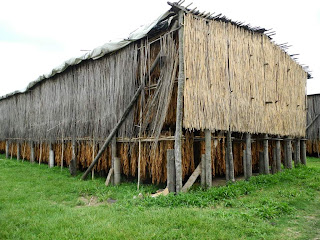 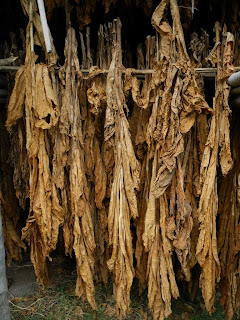 At the end of 2012 Ingrid joined me in Buenos Aires, Argentina. The original plan was to meet in southern Patagonia, but I couldn't make there within her fixed vacation schedule. The new plan was to meet in B.A. and fly to Patagonia. This plan spared me a 3000 miles round trip from B.A. to Patagonia and back. Routa 38 and40 are long and boring stretches of highway. While I won't have the bragging right of saying I rode to the "End of the World", I didn't have to spent days on end trying to stay awake on bone crushing boring roads like this one.

On arriving in Rioja, AR, I learned that next race starts in Cordoba, follows off road dirt course for the first half of the race, then the riders travel on the highway, ending in Rioja, where we are in position. The racers must follow posted speed limits on the public roads, so short of being in Cordoba, there would be excitement. I learned that the actual route is kept secret until the day of the stage, so the racers have equal knowledge of the course. This makes it hard for spectators get in position beforehand.  We skipped riding all the way to Cordoba.

The next day I hung around the hotel and heard from Pablo Kohan late in the day that he managed to secure a wrist band for me. It is difficult to get these wrist bands and Pablo pulled a rabbit out of the hat. Some how he knows a guy at the Argentinean Tourist Bureau, who released a pass late in the day. I got on my motorcycle and wasted no time getting to the secure bivouac where the racers work on their vehicles, eat and sleep. Pablo met me at the gate with the high tech wrist band. The wrist band has an RFID chip built into it and the guards scan each one before allow entry. Cool, I'm in.

I wondered around the bivouac for three hours, talking to racers and their support teams. A team from England offered me a cup of tea. How perfectly English. 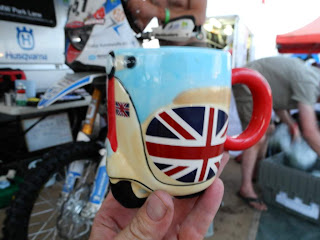 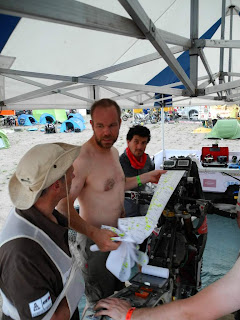 The English racer was trashing his paper scroll that is issued for each race. The scroll assists the race in navigating the race course and describes the turns and hills. The racers study these scroll and mark them up with highlighters. I took home a length of scroll as a souvenir.

My favorite moment was finding Nicolas Boyer, the French racer that stopped were we were watch the Tucuman stage. He need tools and bolts to secure his rear sprocket, which I gladly provided. He remember me and chatted as he removed his back tire. He had no support team, doing all of the maintenance work on his motorcycle, after racing that day and traveling to the next bivouac. Many racers have a support team and get to rest. Boyer does the work himself, with cracked ribs. This guy is a genuine Dakar racer, the real deal. I have so much respect for a guy that takes on the challenge of the Dakar by himself, like the original racers. Boyer is my Dakar hero. 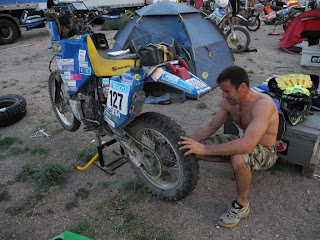 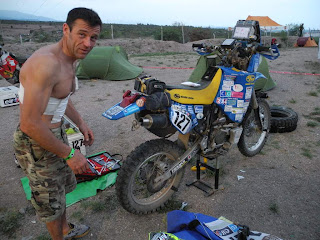 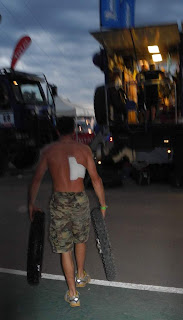 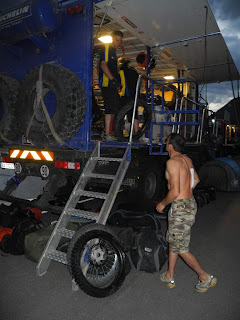