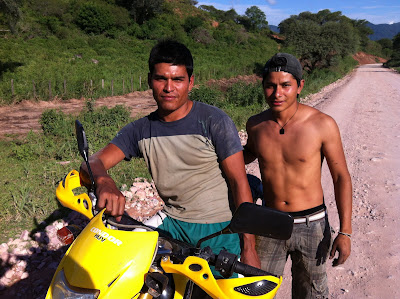 At the recommendation of Guillermo of Salta/Buenes Aires I took the long way into Boliva. I rode north of Salta, AR, slept in a town a short ride from the frontier, then crossed into Bolivia at Yacuíba, BO, in the morning. Took a big hit changing my Argentine Peso for Bolivian Pesos. Because the Argentinian Peso is so unstable and the private trading (a.k.a. black  market), the exchange rate outside of the country is very low.
Soon I was heading north and then near the edge of town I headed west. The road was paved, for the first mile or so and then turned to dirt. I love it when I get faked out by paved road that turn to dirt not far along. About an hour into the ride and passed a small village by 10 minutes, I lost power. Coasting to a stop I looked down  and discovered the problem. My chain wasn't where it should be. Turns out it was along the road, some 100 feet back. I packed all manner of tools and supplies, but didn't include a chain breaker tool. That is exactly what is needed to put a chain back together once it separated. I tried flagging down several cars. None had a chain breaking tool. A motorcycle stopped and quickly understood my problem. The rider left and returned a little while later, not with a tool, but with two guys. They had a hammer, a Philips screw driver and a box wrench. I quickly understood that the one guy was a mechanical genius. They proceeded to remove the surplus remains of the chain, the with great skill tapped the pin almost all of the way out of a link. I found a 5 foot log and positioned it perpendicular to the installed chain to provide a base to drive the pin back into the second link. It took time, but these guys saved my bacon with the most basic of tools. I gave them a considerable tip by local standards and was on my way. Then two days later I bought a chain breaker tool and later brought a spare chain back to Bolivia when going home for three weeks. In fact, I am still riding on the same chain that these mechanical super heroes repaired in the middle of no where.