Captain Ludwig on Land and the Money Exchange Game

Captain Ludwig had anchored in Cienfuegos a few days earlier and drove to Havana where his wife Elisa and baby daughter had flown in from Cartagena. We met at at the famous Coppelia for ice cream.

Cuban nationals pay 15 National Pesos (~$.75) for a large serving of ice cream and tourist sit in a separate area where they paid considerably more, about $3.00 USD.

In Cartagena I offered to take photos of Ludwig’s family, but there wasn’t enough time. My Nikon battery charger had gone missing in Jamaica leaving only the iPhone to take pictures. Fortunately Ludwig had a camera, so I took a series of pictures of the baby and the proud parents. When I saw Ludwig a few weeks later in Centrifuges I asked him to send me a copy of the favorite photo that I took. It would never happen. In Havana he lost a backpack in a taxi that mostly contained clothes, but also had the digital camera.

[Update: I just heard from Captain Ludwig and learned that his wife, Elisa, had download the photos to her laptop before that camera was lost in a taxi! Below find the photo they shared with me.] 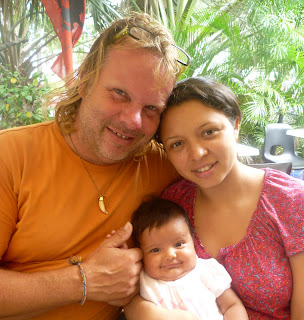 In need of CUCs, the “convertible currency” I headed to Western Union, a short walk from the ice cream plaza. Of the money I needed to exchange, a 100 Euro bill had a half an inch tear. Western Union would not exchange the torn bill, so I was forced to seek out an international bank, Bano Financial International (BFI.) It was too late in the day to find an open BFI bank. The next day I would find one near my casa particular. The bank exchanged the torn bill, but charged a 1 CUC "commission", roughly $1.00 USD. Later in the trip another branch would charge one half a CUC per bill to exchange two $20.00 USD bills with small tears and to my surprise, they agreed to exchange a $20.00 USD bill that looked like a mouse had chewed a hole in the middle.

It is impossible to withdraw money from a US bank account using a Cuban ATM or get a cash  advance from a US based credit card. US citizens have to take stack of cash with them into Cuba. It is best to take Euros into the country, because the Cuban banks take off an additional 10% to exchange USD. Ouch. If you have an account for a Canadian, European, or any bank outside of the USA, then getting cash from an ATM is not a problem...
Posted by Peter Bodtke at 12:21 PM