Ingrid flew back home and I had the afternoon to find a new rear tire. The adventure motorcyclist website Horizonsunlimited.com has a community section where travelers can reach out to locals for advice. I sent a message to the Mexico City mailing list, asking for advice on where to get a new rear tire. Within hours I received messages from locals, some general advice and some mentioned specific stores. The later was what I was looking for and shortly after checking out of our hotel I made my way to Moto House. After consulting with the clerk I picked out a Bridegestone tire and went up the street to have it mounted. Within two hours I was on my way to Tuxpan, a town I had stopped in with John and Tom while riding north through Mexico in 2009.
Leaving Mexico City I hit a little rain, but it soon passed. The bigger problem were both hands cramping. I had taken a few days off riding and my fingers were not back in the swing of things. I had to pry my fingers straight on both hands for the next two hours. By early evening I reach Tuxpan, four hours of road time, but more like six or seven on the road. 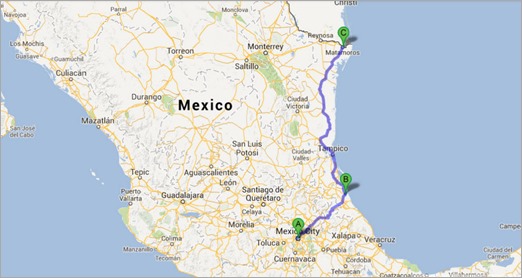 The following day I was determined to reach the US/Mexican border before stopping. On route the road had other plans for me. Somewhere south of Tampico I noticed an asphalt ridge in the road was making my ride squirrelly. At first I thought the ridge I was crossing over was taller than I thought, cause my rear tire to wobble a bit. A mile or two later I decided to stop for gas and as I slowed down I realized the rear tire was flat or very low. Finding the air compressor and adding air only revealed a hole in the tire. Air being pumped in was coming out the hole in equal measure.
In Mexico you don’t have to go far before finding a tire repair service. I had to wait while the guy fixed a truck tire. He had problems seating the tire, so I bought him a soda, took the tire off bike and got lunch. 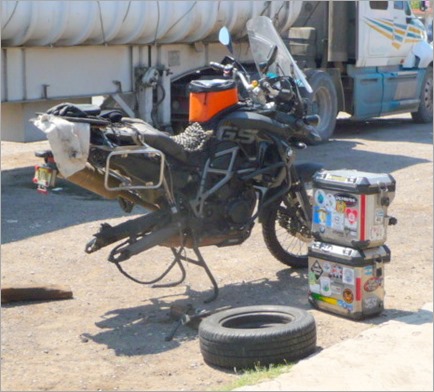 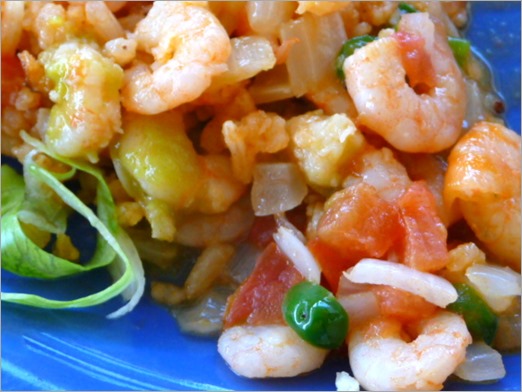 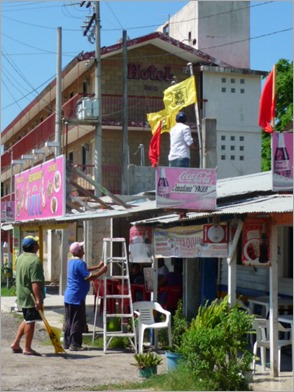 While waiting for the tire to be un-mounted and a fresh inter tube installed, a truck pulled up and a small crew of guys hung flags for political party. 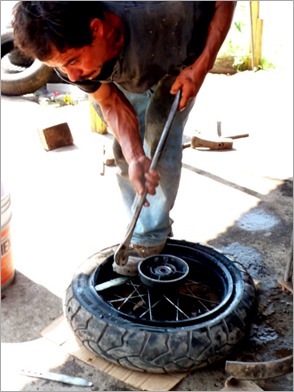 Eventually the truck tire ahead of me was fixed and mounted. Within a half an hour a new inter tube was installed and the tire was up back on the motorcycle. The whole deal chewed up 2 or 3 hours. It was a good break and interesting/curious to see new political flags being installed. The rest stop would come in handy as I rode until after midnight to Matamoros and the US border.
Posted by Peter Bodtke at 2:50 PM