I spent some time riding round Trinidad before heading west. On the south side of town I found a vegetable stand, with the colors I had been keeping an eye out for sometime. 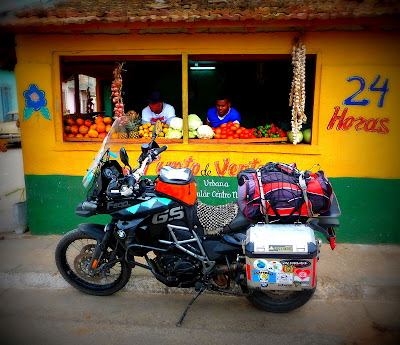 I took quite a while to get the above picture. Local men were hanging around the counter, cluttering the picture. I took a few photographs with them, then waited for the leave. These guys had no where to go, so I gently asked them to step to the side, which they agreed. As I was getting ready to go one of the hombres said I should pay something for taking them picture. I quickly replied that I was a famous photographer and that they should pay me.

I could not get enough of the vintage cars in Cuba. The reason there are so many is directly tied to the embargo and the abundance is a raw product of necessity, not choice. The fact that so many are still running is a testament to the ingenuity and perseverance of the Cuban people. 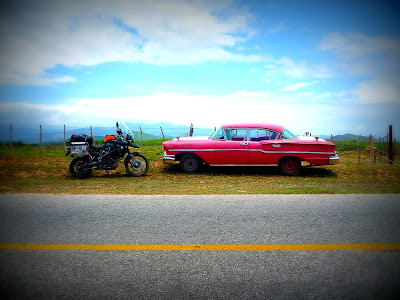 The beach is a short ride due south from Trinidad. The map showed a resort, no doubt designed for tourists. I had no interest is visiting a tourist zone, preferring to see the day to day places instead. I stopped along the road long enough to take a panorama of the seaside. After days of being inland I had visions of floating in the salt water, but in the end decided to ride on without swimming.

Edging my way west along the coastline, a church appeared. Gotta love the yellow color.

The ride towards Cienfuegos was uneventful. The coast road revealed a memorial to a political leader. I hardly paused before riding away. Being on the road for months was wearing on me and my time in Cuba was taking its toll. I stopped at the Jardín Botánico de Cienfuegos to get my bearing and confirm that  I was headed in the right direction. Indeed I was only a short distance from Cienfuegos. The stopped turned into a long conversation with a park worker. As always there were a lot of questions about the motorcycle and my trip. Then I had a chance to ask the guy about his impressions of Cuba. He spoke about the low salaries, joking, "they pretend to pay us and we pretend to work." I asked about the five Cubans that are imprisoned in the US. There are many billboards in Cuba calling for their release and labeling their case as an injustice. What was this about? He explained that they were caught in the US after engaging in some spying activities. When I reflected that when people are put in jail for spying, then the case isn't really unjust. He agreed...  The story is presented on Wikipedia: Miami 5 On April 22, 2013, René González was paroled and allowed to return to Cuba for his father's funeral. A federal judge allowed him to stay in Cuba if he renounced his US citizenship, which he did. Ultimately I did not visit the gardens, as I was low on funds and energy.

The next stop marked the last city that I would visit in Cuba. I rode over 1,800 miles in the 27 days on the island, visiting the country nearly tip to tip. 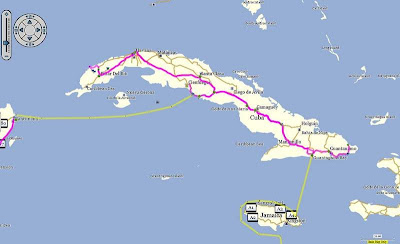 Next stop, Cienfuegos and locating the Stahlratte.
Posted by Peter Bodtke at 6:11 PM