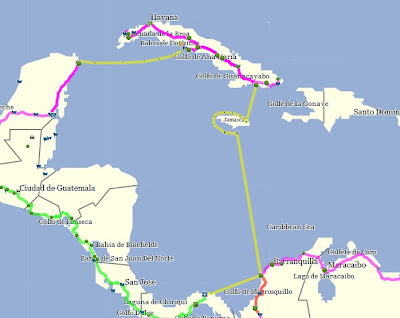 The Stalhratte set sail on April 10, 2013 from Cartagena, Colombia, to Port Antonio, Jamaica with 6 motorcyclist and a compliment of backpackers. After being in South America for 6 months, I was a bit wistful to close this chapter of my journey. When would I return? Would I ever see the amazing people I had met and visit the cool places in South America again? Leaving Colombia would be a big point in the trip. With something like 3/4 of the trip behind me, I started to reminisce about the first days and weeks in Venezuela and how overwhelming the road ahead seemed. During those early days there was a touch of anxiety as I contemplated the many borders ahead, crossing the Amazon, my limited Spanish and non-existent Portuguese. Mostly I ruminated and outright worried about riding alone in northern South America. Many ride the western side of South America, skipping Venezuela, Guyana, Suriname, French Guiana and large sections of Brazil. The travel blogs do not report much about the roads I took on through the Guianas. The biggest point I gathered would be problems getting insurance for French Guiana. I resolved to take the trip one day at a time. Now this was all behind me, and the memories were starting to blur together, some fading away. The days riding, even the days holding still in one place, were so rich with experiences, an avalanche of impressions, sensations, emotions, it is impossible to hold on to all of them. Many will be lost, the best I will hold on tightly.

For the last two night in Colombia I stayed at the Hostel Mamallena. A dorm room, wifi and tourist location all added up to the perfect spot to spent two nights in Cartagena. The last days in Colombia were spent shopping, exchanging USD for EUROs, delivering the motorcycle to the Stalhratte and hanging out with some of the riders that would be on the trip.

The night before setting sail, around 4:00 AM, in the dark of the dorm room I stumbled. As I fell my little finger somehow got caught under my knee and became dislocated. Ouch. As I studied the finger and its odd line, the thought of seeking out a hospital loomed over me. By my rough estimate it would mean finding and taking a taxi to the emergency room with a finger out of joint, waiting for hours to be treated and released, then traveling back to the hostel to packing up and get to the Stalhratte. Or I could just give the finger a firm tug and reset it. My mind processed the above in seconds and the next thing I knew I was grasping the little finger with my left and a good YANK. Surprisingly resetting the finger was not painful. The joint became swollen, bruised and tender for weeks and weeks. [Note: months later the range of motion of  my little finger remains reduced. Another souvenir from the trip.] 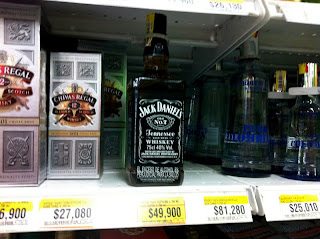 I stocked up for the sea voyage and final major leg of the trip with, chocolate, razor blades, motion sickness pills and most importantly the last bottle of Jack Daniels available at the Exito grocery store. 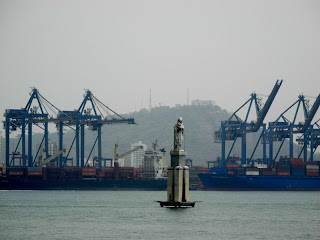 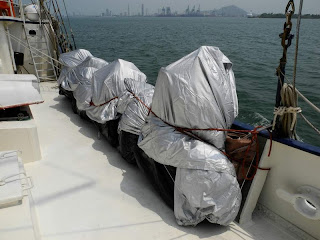 Six motorcycles wrapped up for the sea voyage ahead. 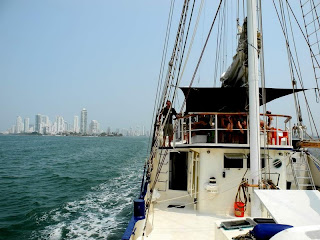 Motoring out of Cartagena habour. 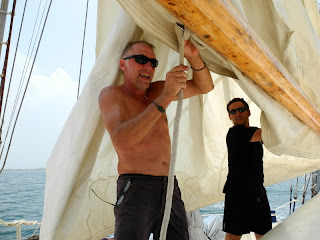 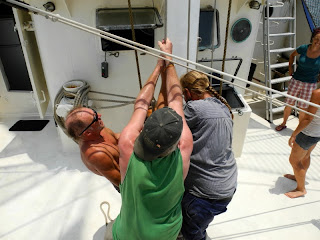 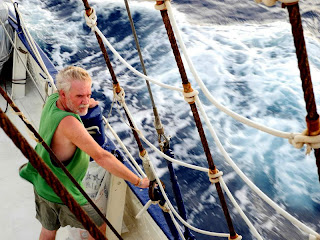 We would experience strong winds and high waves for the first two days out of Cartagena. This is very typical conditions on the north coast of South America. For those two days we sail at 8 to 10 knots, making good time. After two days, like clockwork, the winds reduced and we sailed at 6 to 8 knots for the balance of the trip to Jamaica. Many of the passengers did not do well in the high seas. Motion sickness pills work wonders. The treatment needs to start before the waves are strong. One passenger could not get out of bed for the first three days and made short appearances on the fourth and fifth day at sea. 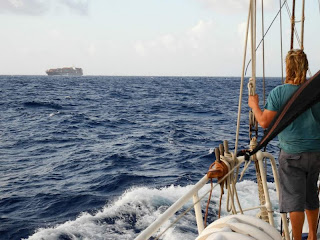 Captain Ludwig observing a container ship. During the five day sail we encountered only a few commercial ships. Each sighting is duly recorded in the ships log. 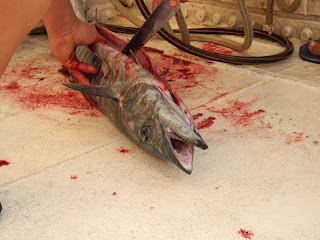 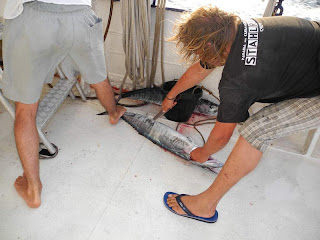 Two fishing lines were always in place while the Stalhratte was under sail. Several mackerel were caught between Colombia and Jamaica. Two slipped off the hook as they were lifted out of the water. 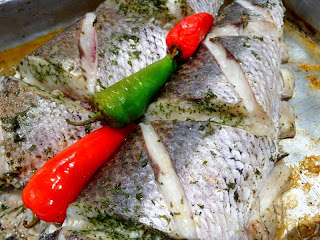 Now docked in Port Antonio, Jamaica, we could not leave the boat until it was inspected by Jamaican Customs officials and the automatic quarantine lifted. We were permitted to swim! We had spent 5 days at sea. Naturally we could not swim while under sail, so diving into the bay took little encouragement. Errol Flynn Marina, Port Antonio, Portland Parish, Jamaica 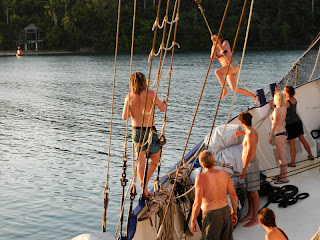 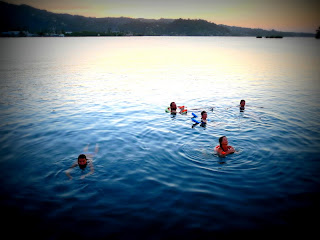 It was the end of his shift and one of the Marine Police decided to join us for a swim. To his partner's surprise he handed off his gun and radio, then took the rope and swung into water. Only in Jamaica! Captain Ludwig preparing documents to bring the Stalhratte into Jamaica and visas for his passengers. 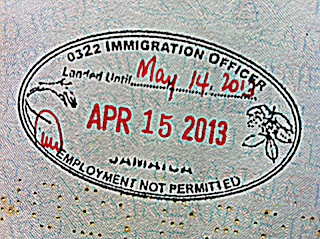 The next morning Jamaican Immigrations arrived and we were stamped into Jamaica! 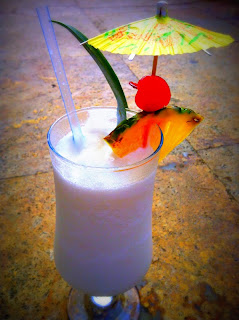 Time to celebrate. During the stay we consumed many glassses of pina coladas, mud slides, Red Stripe would be cheerfully lifted. And many plates of jerked chicken and pork were devoured. Welcome to Jamaica mon.