The Stahlratte entered the port of Santiago de Cuba sometime after sunrise. We motored past the fort that protected the harbor in colonial times and dropped anchor near the marina. The captain went ashore while the rest of the boat had breakfast. Afterwards we tied up to the dock, but could not leave until immigrations and customs officials arrived. Motorcyclists and backpackers prepared their luggage while waiting.

Customs arrived to inspect the boat and brought dogs to check for drugs. They made a thorough search. The officials went through each pocket and item of some of the passengers luggage. One passenger ignored the captain's warming and tried to smuggle five marijuana seeds through Cuba. There was no intention to leave the seeds in Cuba, they were intended for use at home...but the seeds were found and a fine of $200 USD was applied. A single seed was found in another passenger's luggage customs let that person go without a fine. Even the trash from the boat was checked by the dogs.

We started the importation of the motorcycles at marina, in the Customs offices. More paperwork would be required in town at the larger customs offices, and a trip to Transito... 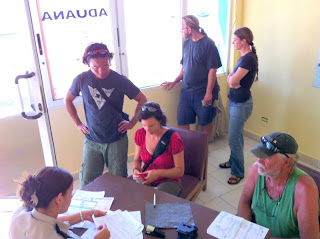 The ship clears quarantine and we are allowed to off load the motorcycles. 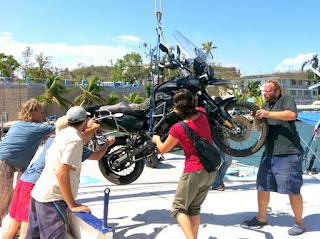 In short order every bike was on the dock and luggage loaded. Next stop Customs in town to finalize the importation. Not so fast. We found the Customs office in town, but were told to return in the morning for reasons I never learned nor did I really care. Finding a money exchange office was top on my lists. While I looking for the money exchange office a few blocks down the street, the rest of the riders rode on...and I was on my own, not for the first time. I rather prefer traveling alone anyway and need to find the international clinic and medical attention for my little finger. Getting the infection treated was a higher priority for me than finding lodging. After visiting a doctor and securing a room for myself and motorcycle, I ran into some of the backpackers and riders later that night. A few riders returned to the familiarity  of the Stalhratte for the night, while others found a casa particular in town.

The next morning we were back at the customs to complete our temporary motorcycle importation. We attracted quite a crowd of curious Cubans while we waited for the paperwork to be completed.

Once we had our temporary importation sticker paid for and stuck to our windshields, we headed to Transito for our licenses plates and license cards. 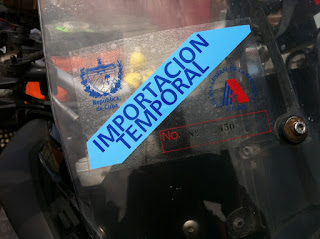 The licensing process would end up taking three trips to the Transito office, a trip to the international bank for a special stamp and hours for the Transito workers to figure out how to input motorcycle data from no less than three foreign countries into a system that they rarely used if ever. 24 hours later we had completed all the steps and could ride as we chose throughout Cuba. 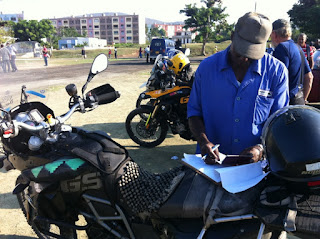 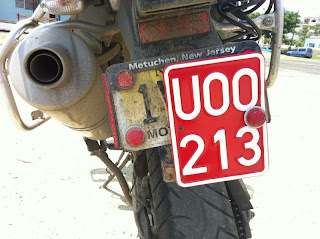