Started the day on Tarija, Bolivia. Hit the road at noon. After picking up a chain breaker tool I left town on Routa 1 (the Pan American highway.) A few miles north a sign appeared directing me to turn left -- onto a dirt road. I left the lovely paved road assuming this is the portion of the route to Potosi that the Tarija tourist office mentioned as the "not paved section." An hour of exciting dirt road, replete with fog ensued. After said hour, I merged with a very paved road. I hadn't encounter much traffic on dirt road, which was very curious. On route I checked my feeble GPS and confirm I was on the PanAm. Had I just taken an adventure detour? The first vehicle was a luxury bus...hmmm. It seemed like a cruel joke. I had detoured the easy road to follow the official Routa 1. The photos below show it was not a waste. 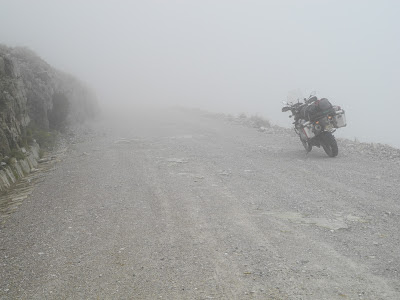 ...memorials for those that did not properly negotiate the turn...


After several hours of riding the temperature started to drop, so I put on my liners, heated vest and warm driving gloves. This helped beat back the cold, until the sun set and the temperature dropped further. Still about an hour from reaching Potisi, finding something warm to drink was key to my chilled bones. In a little town I was directed to an adobe building where I found a family serving food. The dining area was separated from the kitchen by several bed sheets. I could hear the family's daughter practicing her school lessons behind the curtain. The roof was some kind of thatch and the floor was dirt. I really didn't care about the ambiance of the restaurant,  I was cold and a touch hunger. The coffee with chocolate, bread and soap was magical.

Back on the bike I arrived in the hills above Potisi and worked my way toward the center that I never truly identified. Potisi is a crazy town, very hard to navigate. The street are very narrow and the drivers wouldn't give you an inch when trying to merge. Car pull out without warning and traffic lights are considered leftovers Christmas decorations. The first hostel had room, but only vague directions to a parking garage. The garage was elusive, so I settled on a high end hotel that had a garage onsite, reportedly a good breakfast, fast Internet service and the deal maker -- 2:00 PM check out.

Settling in to my room I opened a bottle of red wine and proceeded to drink most of it with half of a dried sausage with bread. All the things you aren't supposed to do at high altitude. The next morning I had a splitting headache and a mild hangover. Would I do it all again? Sure.

Getting out of Potisi was a challenge and included loss of electronics... To be detailed in the next post.
Posted by Peter Bodtke at 10:16 PM