The Border and Beyond

The Mexico/Texas border was the only thing on my mind as I rode north. Passing through Tampico I changed lanes without using my turning signal and perhaps got too close to the truck ahead. This precipitated an ad hoc meeting with the local traffic police that were following somewhere behind me. I tried asking them for a warning for this minor traffic offense. They tried to put the squeeze on me, saying the office where the fine would be paid was closed and that I would have to spend the night. My answer, “Ok.” They demurred, suggesting that $100 (USD) would solve everything. Calmly and with resolve I replied, “I don’t take care of problems like this on the side of the road.” The officer gazed into the distance, smiled weakly knowing he wasn’t going to get a bribe from me and handed my license back to me. Thanks Paul Stewart for sharing that you refuse to pay bribes.
With hours to ride before reaching the frontier, nothing but refueling and police check points would stop me. Nothing but a beautiful sunset over a lake, with mountains in the distance. 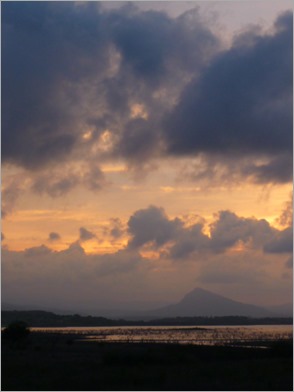 In 2009 I took this same route with Tom and John. The difference was less construction north of Tampico and a three hour delay fixing a flat. Just north of Tampico I heard a loud scratching sound and saw my right pannier coasting to a stop behind me. I had failed to properly secure the locking mechanism, again. Luckily the net cargo bungee hung on long enough for me to notice the sound of pulling the pannier or I might have gone further without notice. There are some curious “hero scratches” on the underside of the pannier.  Now I was facing sunset with hours to go to the border. I pressed on into the Mexican night, arriving in Matamoros after midnight, I checked into a “love hotel” for 8 hours. The hotels are cheaper on the Mexico side of the border and I had some souvenir shopping to do in the morning.
The next day I crossed into the USA without incident. There was more than a touch of apprehension fueled by travels to Cuba, but the questions asked at the border weren’t extensive and soon I was rolling north to San Antonio. At the Horizons Unlimited meeting in the fall of 2012 I met Andy Tiegs, who put me up in San Antonio. Now I would be stopping to see him and sharing stories from the road. Andy was meeting friends for happy hour and I set off to met him there. “Twin Peaks” is the name of the bar/restaurant, which made me think of David Lynch and his dark TV series. Wrong. Think Hooters, Texas style. Ahhh, its good to be back home. 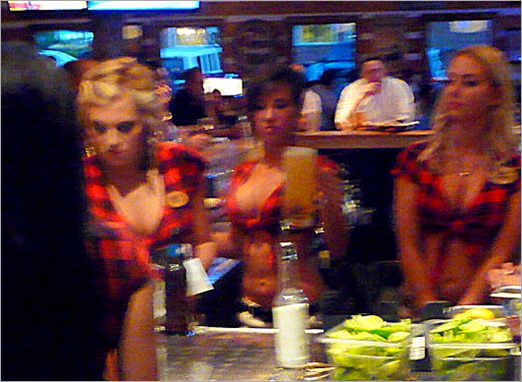 The following morning we joined his motorcycle club for breakfast, where they plan weekend rides and generally shoot the shit about all thing on two wheels. There were lots of questions about my trip, which I gladly answered. I was invited to join the club on a ride through the Texas hill country. My schedule wouldn’t allow it and I had to decline. The conversations moved out to the parking lot. That is Andy standing the left and an authentic cowboy hat on the ride side. 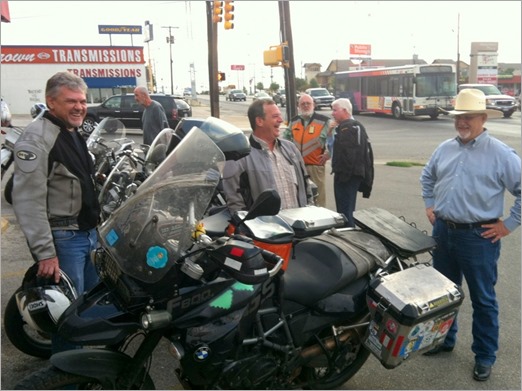 One of Andy’s friends is gearing up to make a short cowboy movie. The expected length is 20 minutes. He was gathering rifles which would be used as props. The truck of the car quickly filled with guns, then the back seat. It seems everyone in Texas has a gun. When I asked about the propensity of guns, there was group chorus that guns were carried everywhere, and with a smile they said they carry guns, “Just in case.”