San Antonio has a rich history, including the battle of the Alamo. I did not have time for tourism on this trip. Reaching San Antonio from Dallas was a fairly quick trip. It should only take 2 ½ hours, but searching for a working air compressor made the trip closer to 4 hours. I was keen to follow the advice Grant Johnson (Horizons Unlimited) and John Ryan shared on the correct tire pressure. If the tire is under or over inflated, the rubber wears out faster. Getting the most out of each tire is quite important when you plan an extended trip. With great frustration, the mini Aerostich compressor I carry failed to work. As time allows I will use the line tester Rick Johnson (Citibeamers MC Club) gave me to sort out the problem with power. One of the items that did not make it into the kit is a battery powered soldering gun, so I have to buy a simple one on the road or wait until another stop.

The GPS got me to Andy’s place in San Antonio without difficult. Soon we were off to meet Jenny and her husband Bill at La Tuna.  The local description for this kind of place is an “ice house.” The name translates into “beer bar.” In Texas you can drink whiskey warm, but you want your beer cold. It was truly a blast catching up with Jenny. We told old stories, got updated on the passages of life and shared old secrets that we could now tell. Jenny is doing really well and her husband is great guy. Life is good in San Antonio. For some explicable reason I did not get a photo of Jenny. Friends of Andy joined us at La Tuna, another Andy and John. Below find a couple of shots John took at La Tuna. He is a very good photographer and overly modest. Sadly Jenny is obscured on the photo below. 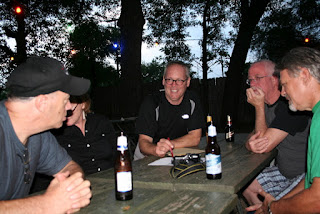 The next day it was raining, which was a perfect day to take care of a list of open items. 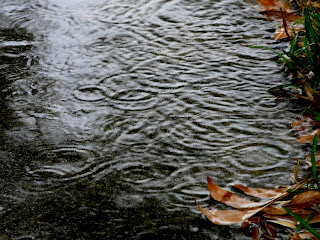 I wasn’t happy with the cost of a traveler’s insurance policy I had taken out with International SOS. They came highly recommended, yet remain a few hundred dollars more than other carriers. The best I could figure out, the policy provided $1,000.000 in coverage for evacuation services. If I was mountain climbing, then it might be the insurance for me. The policy was going in force the next day, so I cancelled it decided to start a new policy with Medjet Assist, a carrier I had used before. Actually I decided to arrange for coverage somewhere down the road. This turned out to be a small mistake as they insisted on a 10 day waiting period because I was already traveling.  The policy was confirmed and coverage will start September 28th. I will ride carefully until then, and after too!

I spoke with several credit card companies to advice them that I was traveling outside of the country. This is an important step. You don’t want to be using a credit card far from home only to have it declined as a fraud protection measure. It is equally important to have several ATM cards in case one cad is declined or is eaten by a cash machine and you don’t have time to wait for it to be returned. I learned that CaptialOne does not charge international truncation fee for using their card outside of the country, but they DO charge for cash advances. The rate is high, so I advice only using that approach in emergencies. If you have a Bank of America account, then you can withdraw cash (MX Pesos) with no charge, only while you are in Mexico. If you have the funds (to qualify it take a large chunk of money), open a CitiBank or Chase Bank premier account and you will be able to withdraw cash worldwide at their branches for 1% and no fees. Regular bank accounts, including CitiBank, HSBC and Scottia Bank (a Canadian bank with a large presence in Latin America), charge 3% for cash withdraws outside of the country. These fees add up over time, so plan ahead.

At Andy’s place my GPS started acting up again. This time I could not get the touch screen to respond. Andy did some research on the Internet and found a way to reset the device by hold down certain buttons when starting the unit. Unexpectedly this step introduced new problems when starting the device. After a re-set the device asked for you location…and recall that the touch screen was not working. I could not get beyond that screen, so now the GPS officially a brick, dead, morte. I had spend hours and hours learning to use this critical tool and now I had to use my back-up paper maps, and weak Spanish to confirm my location and get local directions. Yup, I’m screwed until I get to Costa Rica, and not in a pleasant way.

My Mexico map is an old National Geographic paper map, for the whole country, contains much useful information, but lacks fine city level details. This will be interesting…  I tried to buy a replacement GPS, but they are impossible to find one designed for motorcycle use in local stores. In the end I ordered a replacement (the latest and greatest, a Garmin Zumo 660, with lifetime map updates) from a store in New York City. The plan is that Ingrid might meet me in Mexico City and would bring the new unit. Failing that plan, there was the possibility that my friend Greg would be traveling to Costa Rica from San Diego and could transport it there. As it turns out his brother Chris was arriving in San Diego from Costa Rica for a week and could take the new unit, in case Greg has to cancel his trip. Yes!

Andy is an amazing host. He took me to a Staples store where I picked up business cards that Jenny so skillfully designed. See the header of the blog for her delightful design. If you ever need graphic design work, contact her at her business:

While at Staples I bought a 1 TB external hard drive to store the movies and picture I will be taking. Yes, hemorrhaging money, why not, this is a huge bucket list trip, so go all the way.

Andy put me up for two nights, a consummate host. We had lots of laughs between Andy and his hometown friend John. 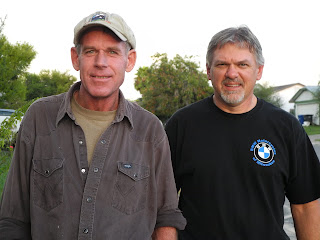 John took these shots of me loading the bike and preparing to leave. I think I am talking to Medjet Assist to start a policy in the one photo. 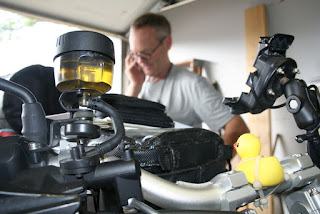 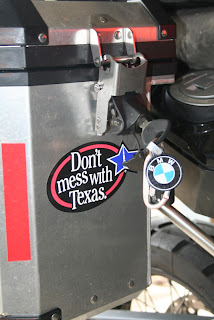 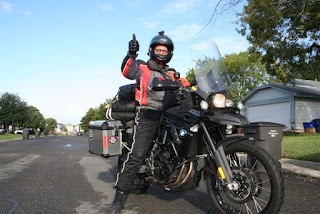