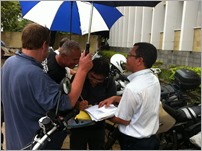 Escaping Cartagena took two and half days. The Stahlratte landed in Cartagena,Columbia from Panama on a holiday, so the immigrations and customs offices were closed. We could not process our visas, motorcycle importation paperwork or get the required motorcycle liability insurance, until the next day. There were thirteen motorcycles which means a mound of forms and hours for the officials fill out. It didn’t help that the “fixer” was an hour and half late showing up to the customs office. This led to the paperwork for the last motorcycle to be completed at 12:10 PM. Well, not quite completed, the big boss had to sign off and now it was lunch time, so come back at 2:00 PM… 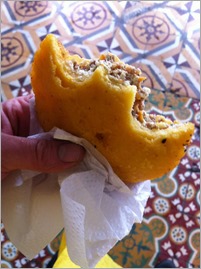 After lunch we returned at the appointed time and within 20 minutes we were all dashing to connect with the insurance lady. Copies of titles, passports, drivers licenses and cash in hand, the insurance forms were filled out. Oh, but now she had to go back to the office to prepare the actual insurance card that we would carry. She said she would try to come by the hostel tonight with the cards. In Latin America when someone says they “will try”, it is almost certain that it won’t happen. My intention was to leave for Venezuela near dawn and I made sure she understood to please, please, please have my insurance card ready in the morning, or later that night.

That night the insurance lady did not arrive. Big surprise. What did arrive was torrential rain. It rained so hard that water was dripping heavy on my bunk. So much that I could not ignore it and we had to move the bunks in the dorm room around in the middle of the night. The rain caused flooding in Cartagena, reportedly knocking out networks. The insurance lady claimed her network went down and she could not complete all of the forms, but she would come with the insurance cards that were prepared before the network went down.

I packed my luggage and loaded the bike in the hope that my card would arrive after lunch. She showed up and started calling out names: Phillip, Taka, Edwardo. Was mine in the stack? Yes! It was there! I said quick goodbyes and expressed plans to see everyone in Ushuaia for Christmas. Ten minutes later the bike was pushed through the winding hallway and down a ramp to the street…and I was gone. All of the other motorcyclist that crossed the Darien Gap on the Stalhratte were going south. I would be riding alone to Venezuela.

Now I wanted to get as close to the Venezuelan border as possible that day. It was 2:30 PM and my wheel were rolling east, Google Maps say it seven and a half hours to Maicao, Colombia, the town closest to the Venezuelan frontier. I usually double the travel time to allow for traffic and rest breaks.

Riding east I stopped across from a roadside vendor. He was selling this wonderful drink made with watermelon and other fruits. A Columbian was asking me about my bike nd the trip. He bought a glass of the fruit drink for me. I love this country.

I took a long break in Barranquillao. While riding around the town I spotted this rolling photo booth. 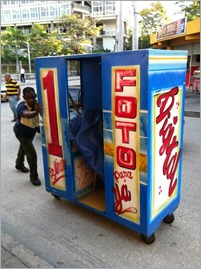 Later I started researching places to stop for the night. Using free wifi at a McDonalds in Barranquillao I identified a few hostels in Santa Marta, amy an hour or so east and got back on  the motorcycle. Santa Marta came and went, and I kept riding. Near midnight I stopped for coffee and teased the vendor that his coffee was very good Nescafe (instant dreck.) 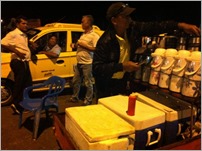 The short hours of the night approached and I was getting more than a little tired. The thought entered my bleary mind to rest somewhere for a few hours. Perhaps I could lay down at a gas station. At that moment a military check point appeared. Three young soldiers(Edilberto, Jairo and Ernesto) were stopping cars and trucks for inspection. I asked them if I could lay down for 20 minutes in the glass to rest. The one soldier tapped into his phone and then showed me the translation. “THERE ARE SNAKES IN THE GRASS”

Ok, laying down in the grass wasn’t a good idea. They showed me two wooden pallets where I could rest. I fell asleep in minutes and woke up two hours later when a loud truck rolled through the check point.

The next morning they gave me Coke and I rode back to the nearest town to get something for us all to eat. I was trying to get the same thing that I had for lunch (see the photo at the top of the page), but ended up buying just the fried bread, to our combined disappointment. Time to ride another couple of hours to the frontier, where I met Demetri…