I’m on a schedule to get to Caracas. A friend from the US might meet me in Guyana, so I am working against that possibility. Plus, I have many miles to travel and hanging too long in any one place sets the schedule back. I left Demetri at the mechanic in Maracaibo and headed out.

The rain started as light drizzle.Whatever, ride through it, it will stop. After a while I start getting chilled and stop to put on my waterproof jacket liner. As luck would have it, there was a guy selling  shots of coffee on the side of the road. Two cups later I got back on the bike. Hours later the drizzle turned into rain and I still hadn’t put on my waterproof pant liners. Big mistake. The rain saturated the pants and filled my boots with water. Days later I got athletes foot from the damp boots. It was a simple matter of find the right cream, in Cuidad Bolivar, to treat the fungus. Best to put on the all the liners and avoid wet boots.

As I rode east near the Caribbean coast of Venezuela, the rain built up in the hills. I crossed a raging river. There were tree washing to the river and I could hear the bleating of  sheep or goat in the distance. All I could imagine is that the luckless animal had fallen in a small stream just up river and couldn’t get out. There was no guard rail on the edge of the bridge. There was at one time, but no doubt the guard railing had been stolen. One slip and there was no chance of survival in the flood waters. I stepped carefully along the edge of the bridge and was mindful that the bank of the river was eroding. Watch carefully to see a section of the river bank collapse into the torrent.

During a break in the rain I stopped to check email. In many countries McDonalds provides free Internet access to customers. Not the case in Venezuela. I rode around Coro seeking an Internet café. 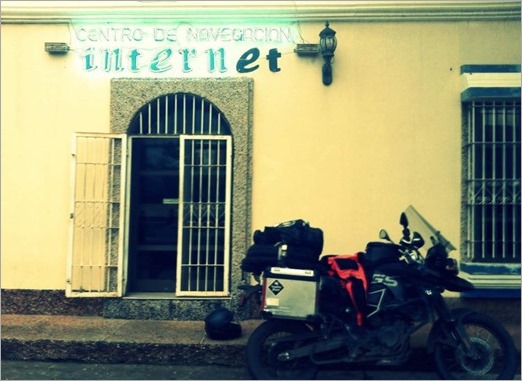 After some search I found a cyber café and read my new messages. There was a new message from Cenair, “…Coro is having some issues with the jail (not safe right now)…” Too late now, I was in Coro. Turns out there was a jail break or protests within the jail. I managed to get out of town without incident. I ever saw so much as a police check point. No excitement, oh well.

I continued on and into the night. The rain started again and made riding difficult. I had left my “pinlock” film for my helmet at home. The pinlock film creates a second layer of the face shield and prevents fog from forming on the inside. When I found the pinlock taped to the inside of the helmet box (I missed it until I went to resue the box…) there was a sticker on the pinlock. And when I tried to peal it off, the plastic under the sticker deformed, rippled. It was the day before I departing New Jersey, with no time to get a replacement. Pissed off, I tossed the pinlock on my desk. Later when speaking to the Nolan helmet importer I learned that there is a protective film under the sticker. The film rippled, not the pinlock itself. Damn. Now my face shield is fogging up, its raining and the lights on coming cars and trucks make visibility miserable. At times I started riding with the face shield up, and suffering rain accumulating on my glasses…uggh. When passing a truck with my face shield open, I got a face full of water when the truck hit a puddle and sent a stream of water directly in my face. All part of the adventure.

Late that night I found a scrappy little hotel in the beach town of Puerto Cabello. 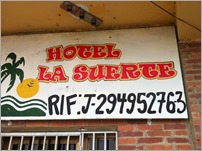 Cheap is good when you are cold, wet and only spending a few hours to sleep. In the room I found a typical electrical outlet (“Edison” style) next to the air conditioner. I plugged my power strip into the outlet and sparks flew, followed by the reek of ozone. The plug was improperly wired for 220 volts and turned my surge protection power strip into a useless stick. The circuit for the air conditioner was blown, so no AC that night. I really wanted the ventilation to dry out my riding jacket and pants. No luck. The only good news was that I hadn’t tried to plug my computer into this dodgy outlet.

The next day when checking out, the clerk left me waiting and went to “check the room.” He didn’t notice the blown air conditioning circuit, which I didn’t mention, but came back claiming that I had trashed my towel and refused to return my 50 Bolivar deposit (roughly $10.00 – $5.00 depending on how you exchange your money.) I was really pissed off at this scam. When reasoning failed, I took action. First I moved the motorcycle into the middle of the car entrance way, so no one could come or go, then complained loudly when a prospective customer stopped in to check the rates. It was working, the prospective customer left quickly. Finally I threatened to call the police. In total there were a few tense minutes, then the clerk gave me my deposit back. I know a few choice curse words in Spanish and used all of them as I left. I would write a bad review on Trip Advisor, but I am sure this place isn’t listed. 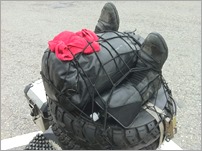 The next day I started drying out my boots. It took days for the interior of the boot to completely dry. I still am slow to stop and put on my pant liners, but will when it really starts to rain… Now in striking distance of Caracas, I pressed on under mostly clear skies. At one moment there was rain on on the other side of the highway and the pavement was dry on my side. I guess it was my lucky day. 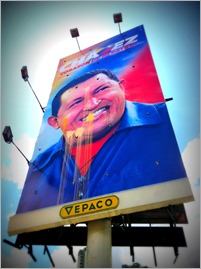 Gas is extremely cheap in Venezuela. The government controlled prices are set with a singular purpose. Sometime back a president raised the price of gas and was promptly voted out of office. Hugo Chavez understood the lesson to remaining in office, keep the poor people happy with inexpensive fuel. There are dozens of toll plazas, but passenger cars and motorcycles don’t pay. All part of the same political strategy.  In the cities I saw billboards that were defaced with paint. Once outside of the major cities and into the countryside it was not uncommon to see political signage painted on the sides of buildings and walls with a  completely different message. There was one recurring slogan, “Chavez is love” with a heart illustrating the word love.

I filled my gas tank many times at the cost of loose change. You never wait for exact change when the price to fuel up measured in pennies. For no more than 25 cents I could fill a bone dry tank. With no reason to conserve gas I twisted to a sustained 80 miles per hours, flying towards Caracas. The only thing that would slow me down was construction. When replacing asphalt surface,  the Venezuelan highway department deploys machines that carve deep groves into the old asphalt before laying down new. The groves that are cut in in Venezuela are deeper than any other country I have ridden in. attempting to cross these lines of death at any speed is terrifying. The channels pull the bike this way and that. I was certain that I would crash at any moment, for miles and miles at times. I was convinced that the groves were designed by someone with a strong hatred of motorcycles. Other that the groves, most of the highways in Venezuela are fantastic. The surface is good, signage reasonable and generally well laid out. It isn’t the quality of the raceway used for the Indianapolis 500, but when combined with the price of fuel and considering it’s South America, the best description is “a motorcyclist dream.”

Late that afternoon I descended the mountains and navigated the highways of Caracas  to Cenair’s house.