For the uninitiated, there is no road between Panama and Columbia, thus it is not possible to drive from Central America to South America. What? No road? How can that be possible in modern times? Yes, gentle readers, its true. Understand that years ago Panama was part of Columbia, and the separation of Panama from Columbia was not as simple as slicing a piece of cake. As with many countries that border one another, histories of conflicts between them almost always leave residual tension. Old animosities die hard.  The official reason for the Panamanians not completing the Pan America Highway is concern that life stock with hoof and mount disease entering Panama from Columbia. Chances are they are equally concerned with illegal aliens, drugs and political instability coming north…thus no road connecting Central and South America and the need transport motorcycles via boat or plane. I met a guy who took a local launch on the Pacific, but the details were stuck on the other side of the language barrier. The option of of air lifting is always there for those with more money than time. It was suggested to me

I learned in September 2012 that the smaller sail boats were no longer transporting motorcycles from Panama to and from Columbia because one of them had sunk. Going forward port officials were refusing to issue safety permits to these small sail boats

Enter the Stahlratte or solidifying the same. The boat was always the top choice, but I left home without making a selection let alone a reservation. There are many posts on the Internet about crossing the Darien Gap. The quality of the boats is highly variable. Captain Ludwig has been doing this run for years and had the trip refined to a well oiled machine. The cost is paid in cash or funds wired to a German bank account. Because Panama uses the US dollar as its currency, it was a no brainer to withdraw funds from an ATM. I made a reservation request from North Carolina when first learning that there are fewer options to make the voyage to Columbia. A reservation confirmation was messaged within hours. No deposit was required. We were given the name of a small port to meet the Stalhratte on the morning of October 11th.

Captain Ludwig arrived, gave a briefing and demonstrated how the motorcycles would be prepared for loading on the boat. 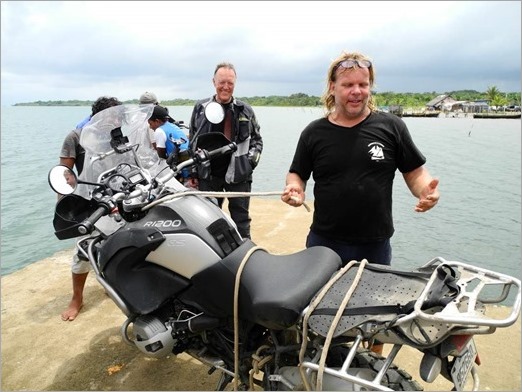 Contents of a Kuna canoe tied up at the pier.

For the mental health of all concerned, we would not witness the loading of the motorcycles onto the boat. The motorcycles were loaded later that day, after we were whisked away by launch to a Kuna Indian island for the night.  Of course we proceed to start drinking soon after arriving on the island.

That night we were served a huge fish dinner and entertained by children that sang Kuna songs and danced. In the morning we boarded the Stalhratte where several backpackers filled out the passenger list. In due course an official from Panamanian customs  boarded the boat and stamped us out of the country. Next we would motor for two hours and anchor between two small island for the night.